Home » Battle Of Chapultepec: Mexico vs The United States 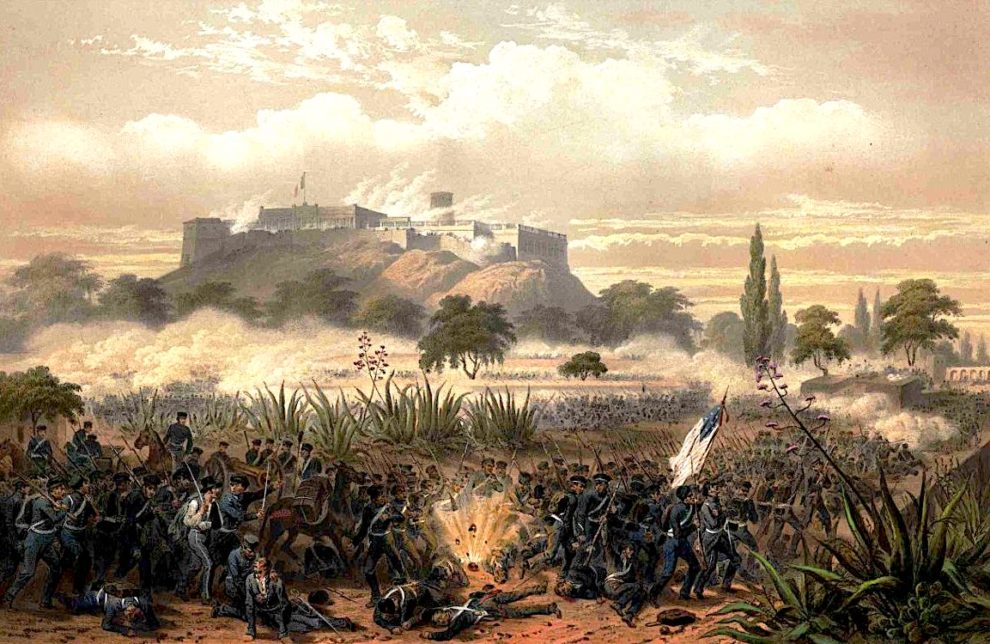 Gustavo Vazquez-Lozano
The only real castle of the Americas is also the place where two cultures crossed swords in September 1847.

There are more than one hundred castles in the Americas. Virtually all of them were built between the late nineteenth and mid-twentieth centuries as recreational homes, amusement parks, or tourist destinations, in republics that had long ago severed their ties with monarchies. Only one can be called a true historic castle, the Castle of Chapultepec in Mexico City, where monarchs—and a princess—once lived.

The home of Emperor Maximilian of Habsburg, the last European monarch in the Americas (1864-1867), attracts millions of tourists every year, eager to  absorb the romantic atmosphere of the legendary alcazar, in whose corridors Empress Carlota once walked.

The Battle Of Chapultepec

Chapultepec was also the stage where the forces of Mexico and the United States battled in 1847, in what was possibly the most iconic moment of the war between both countries, which resulted in the loss of half of the territory for the former. When Gen. Winfield Scott and his army had “the Halls of Montezuma” in front of them, Chapultepec was the last stronghold and the passage to Mexico City.

At that time, the castle was the seat of the Military School. At dawn on September 12, the Americans began a heavy cannon fire against the walls and ceilings of the building.

By the afternoon the corridors were full of dead and wounded Mexicans. The battle of Chapultepec ended in a bloody hand-to-hand combat inside the castle. Sadly, the majority of the Mexican men deserted and fled from the massacre, jumped over the walls and disappeared. But the cadets, and General Nicolas Bravo, fought until the end.

Mexican writer Guillermo Prieto, an eyewitness of the battle, wrote a haunting description years later, in Memories of my times:

“And my forest, my charm, my childhood nest, my childhood orchard, my recreation as a young man, my temple as a man. Each tree held a memory for me; towards each trunk I had leaned like a grandfather’s breast, each bush had rocked me like the arms of a wet nurse. And so that precious Forest humanized in that way, to see it bruised, wounded, choked by the invader, tormented me as if I saw my father’s body trampled and outraged.”

Although at different times some historians have doubted the historical existence of the “Boy Heroes,” the very young cadets who died defending the fortress, the testimony of American soldier Edward D. Mansfield leaves no doubt that there were boys fighting indeed.

In his memories, written two years later, Mansfield says: “The castle was completely torn to pieces (…) among whom were fifty general officers, and about a hundred cadets of the Mexican military academy. The latter were pretty little fellows, from ten to sixteen years of age. Several of them were killed fighting like demons, and indeed they showed an example of courage worthy of imitation by some of their superiors in rank.“

But the story does not end in that fateful month of September 1847 with the entry of General Scott to the capital, which by the way was one of the most benign occupation regimes towards the civilian population.

The conclusion came a hundred years later, in the same place. Practicing the US Good Neighbor Policy, President Harry S. Truman visited Mexico City in 1947 and went to Chapultepec to place a floral arrangement on the monument to the Boy Heroes, and paid tribute to the legendary cadets.

The gesture revived interest in the historical episode. An old general and historian who had written a story about the Military College, Juan Manuel Torrea, born in 1874, claimed to know the exact place where the heroes had been buried.

A few weeks after Truman’s visit, and without supervision by professional archaeologists, the Mexican army began digging in Chapultepec hill. During five days they brought up small animal bones, but no more. After consulting again with General Torrea and others, including an old gardener of Chapultepec, aged 90 at the time, the army did a few more excavations and, of course, they found what they wanted.

All in all, despite the skeptics, there are good reasons to believe that something very similar to the “official legend” of the Boy Heroes happened during the last half hour of the battle of Chapultepec, inside the walls of Chapultepec. However, the real important question is not if it happened exactly as many Chicanos and Mexicans at home were taught at school, but what does the story mean.

If it is a parable, it is an outstanding one, speaking better than a hundred history lessons. It’s David’s story against Goliath, but one where Goliath kills the boy. Here Mexico, a young and weak country, is represented by children, brave and noble but in the hands of inept generals. The flag of Mexico around Juan Escutia is a burial shroud hiding a broken body, sacrificed for nothing. At the gates of Mexico City, the country lost its children. It would take a century for another American, in a very different context, to go to the same place to try to alleviate the wound.

Chapultepec Castle, seat of a doomed empire, site of a bloody clash between two titans of North America, sacred site for the Aztecs, abandoned ghost castle and, for a few years, an astronomical observatory, focalizes Mexico’s history. The famous traveler Madame Calderon de la Barca was certainly right when she wrote that the castle alone is “the most haunted by recollections of all the traditionary sites of which Mexico can boast.”

You can now read the history of Chapultepec Castle in its first ever English-language history.

Who Was Bernardo de Gálvez?
The First Time A U.S. President Visited Mexico