Home » What Happened To The Mural Capital Of The World? 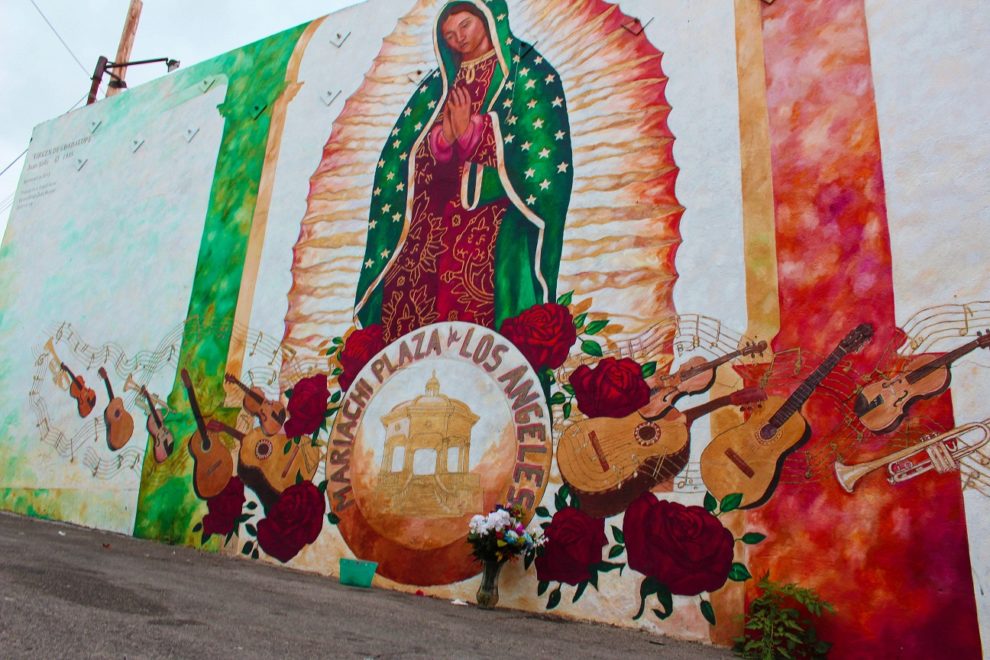 Javier Rojas theejavierrojas
The war on L.A.'s murals was intentional, and now the effects may be irreversible.

The walls that surround Ernesto De La Loza’s work office in Echo Park look much different than they did 20 years ago. The vibrant mural of the Lady of Guadalupe is no longer there. Instead, there is a wall filled with graffiti and attempts to paint over the unrecognizable words.

He points across the street to show me the new upstart businesses that have come into rapidly changing neighborhood,that he says once “had a mural on every corner”.

De La Loza, 71, knows his way around Los Angeles and he also knows how it used to look. That’s because he was a muralist during the Chicano Pride movement in East L.A. in the 60’s and 70’s. He was behind some of the most iconic pieces of work in the city that included murals that highlighted environmental awareness and the struggle for Latino rights.

“These murals represented our struggles and our stories that weren’t being taught in history books,” De La Loza says. “That’s why I started painting, to express myself and for the past 50 years I’ve stood true to that.”

In those 50 years, things in L.A. have certainly changed. Gentrification has hit the majority of Northeast L.A. and with that has come the erasure of some of those murals. But that all started back in the 90’s when murals began to disappear due to tagging, damage due to weather and overall lack of maintenance.

“There was tagging all over them and that was painful to see because it was our own people behind it,” De La Loza says as he takes a deep breath. “We killed the mural movement and that pains me.”

These murals became “eye sores” in the community due to the graffiti on them and neighbors followed with complaints about how they made their streets look. In 2002, the city of L.A. took action and enacted a moratorium on public murals. The moratorium lasted 11 years, which De La Loza calls the “dark age of muralism in L.A.”, until it was finally lifted in 2013 with the addition of a mural ordinance that would protect artists work if ever defaced or attempted to be painted over.

But the damage was done during that period. During the peak of the mural movement in L.A. there was an estimated 2,500 murals up on city walls. In that 11 year period, hundreds of murals were lost due to the whitewashing from the city. An individual who wanted to put up a new mural also wasn’t allowed since they could be fined or even put in jail due to the moratorium.

“We lost more than just a piece of art, we lost our history, we lost years of hard work and more importantly we lost our presence in this city.”

De La Loza says when the city lifted the moratorium it coincided with a new wave of change that came to L.A. around 2013. Highland Park and Echo Park, both Latino enclaves for decades, saw gentrification hit and a rise in new businesses take over the community. By then, more than half of the murals you recognized were gone.

While the city of L.A. now allows the painting of murals, things aren’t as easy as just simply choosing a wall and painting on it. There are multiple fees and permits that are required to paint a mural on a private property and business. The new mural ordinance had unintended consequences as many Latino muralists couldn’t afford or have the time to acquire all these permits.

“The ordinance helped but in reality it helped the more affluent and outsider community that was coming into the city,” De La Loza says. “It’s obvious when you look around the neighborhood whose art is up. It’s nice art but it’s not ours.”

De La Loza still has hope. He says there is a need for murals and a young generation that needs to know about the power of art. He points to other cities like New York and Philadelphia that have restored their own murals and have championed on painting new ones.

“These murals had a purpose back then and they have one now too. I’d hate to see our city deprived of our stories because that’s what these murals were, stories into our lives, our struggles and our rise.”

Javier Rojas is a contributor and reporter for the Daily Chela covering a wide gamut of areas including politics, immigration and the intersectionality of Latino and U.S. culture. He is an award-winning journalist for reporting and photography. Javier grew up in East Los Angeles and is still waiting for his Dodgers to finally break a 31-year-old title drought.