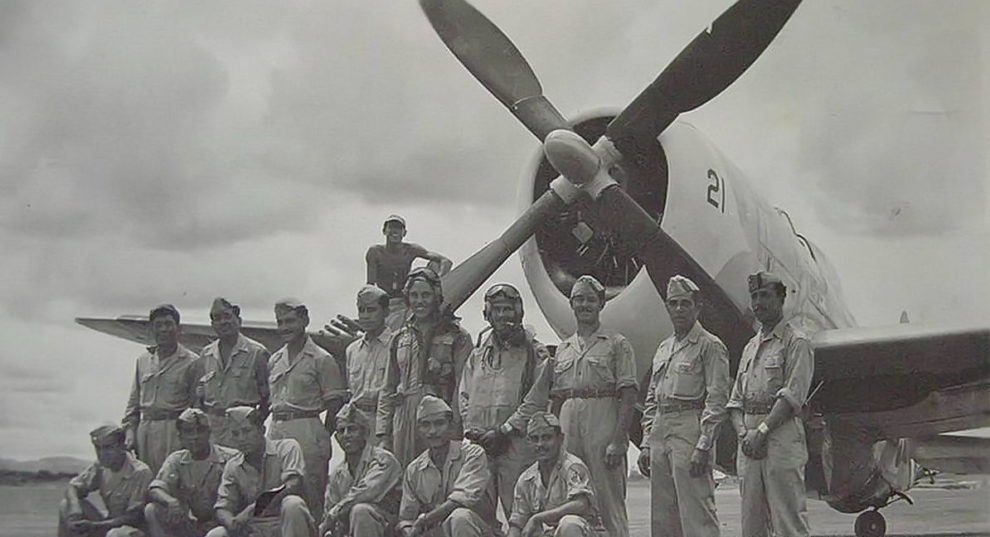 The Mexicans did not fight Nazi Germany or Italian fascism, but Japanese imperialism in Luzon and Formosa.

Historians agree that Mexico’s main contribution to World War II was to provide the United States with precious raw materials especially oil—sorely needed in the war front across the ocean. But few know that Mexico, in addition to Brazil, was the only country in Latin America to send troops against the Berlin-Rome-Tokyo Axis.

This is the story of the 201st Squadron, also known as the “Aztec Eagles,” a group of 30 Mexican combat pilots, most of them in their early 20s, who fought in the Philippines under legendary General Douglas MacArthur.

It was the first time in Mexico ́s history, a country with a strong non-intervention policy, that armed forces were sent overseas. But at the end of 1944, when the Mexican contingent crossed the US border for training, the war was almost over. Thus the Aztec Eagles flew through the last, rapidly-closing gap in order to finish on the side of the victors. Its arrival in the Far East was a shot in the arm for the Allies on the brutal Pacific front.

The Mexicans did not fight Nazi Germany or Italian fascism, but Japanese imperialism in Luzon and Formosa. The mission dripped with symbolism: during colonial times, the Philippines had been administered from New Spain (modern-day Mexico). Mexicans had read of the atrocities of the Japanese occupation in the newspapers, and the battle to liberate the archipelago was a cause they could get behind.

Negotiations For The War

To a large extent, it was the vision of the American ambassador to Mexico, George Messersmith, who recognized this historic opportunity, which made the involvement of the Mexican contingent possible. Ambassador Messersmith met President Roosevelt in early 1944 in order to inform him of the Mexican situation.

Mexican generals were keen to join the combat. Messersmith confided in the president that the best option would be to deploy one to three air squadrons. He also told him that Mexico’s involvement would be more for political ends than out of necessity. Messersmith received instructions to meet with the Mexican president Manuel Ávila Camacho and inform him that the involvement of one to three air squadrons would be well-received by the US.

Pilot selection began in 1944. The strongest candidates floated to the top among aviation academy graduates. Competition was fierce. There were a few outcasts and orphans mixed with the rich boys.

“I was a very humble boy,” recalled pilot Miguel Moreno Arreola for the Los Angeles Times in 2004. “I was an orphan. I didn’t get there because I was privileged. I earned it, and I wanted to help. They were all upper-class, but I was very proud of myself. I was self-made.”

The volunteers came from both the northern and south-eastern states of Mexico; from cities and farms. Among the land-based staff, there was a young man who had worked as a reporter for the English-language newspaper the Mexico City Herald, and a cook from a patisserie in Mexico City.

Mexican Eagles Over The Pacific

The boys of the 201st Squadron docked in Manila Bay on the morning of May 1st 1945. Manila had already been liberated from the Japanese, but Japan had not surrendered yet. The Mexicans received their baptism of fire when they formed a complete detachment wing made up of U.S. fighter planes. Before the men boarded their aircraft, they were all advised to write letters to their families in case they did not survive the mission.

In late May 1945, the Squadron was given its first independent mission: to attack a cluster of Japanese troops near the coast of Luzon. The mission was communicated to the Squadron’s leader, Captain Radamés Gaxiola Andrade. The planes took off at eight o’clock in the morning, flying at low altitude over idyllic rainforest landscapes and waterfalls where intense combat was taking place. Their objective was to support the ground troops conquering Philippine territory by bombing enemy bases, buildings, vehicles, artillery and troops.

In June, the U.S. troops intensified their march through the jungle and the most ruthless phase of the fighting began. The backdrop to the battle against the troops of Tomoyuka Yamashita moved from the rice paddies to the mountains; such a delicate situation meant backup from the air was vital, although the targets were becoming harder to locate as the action moved deeper within the jungle and the enemy all but disappeared into the foliage.

The planes of the 201st Squadron would approach the area one by one, diving down in the face of enemy fire, dropping their bombs and then ascending again, just in time to avoid being hit by the flying debris and battling the enormous gravitational pressure that could cause pilots to faint.

“We got it into our heads that we were going to show the Americans what we could do; what we were made of,” recalled pilot Reynaldo Gallardo, years later. “Get near the target, make sure I hit it—and hit it good, to cause as much damage as I could—then quickly turn around and get out of there. [The Americans asked me:] ‘Hey, who’s that guy doing circles over the target?’ ‘It’s Pancho Pistolas!’ I laughed.”

In early July, the Allies began their frontal attack on Japanese territory. The 201st Squadron was assigned a mission even riskier than previous ones: to go ahead of the U.S. navy and sweep the stretch of sea going from Manila to Okinawa, passing over the island of Formosa (modern-day Taiwan), a stronghold of the Japanese.

The final act of the War of the Pacific began with the invasion of Okinawa. The 201st Squadron, lacking in operative capacity due to the death of five command pilots, did not participate in the invasion. Mexican replacements were already being trained up in the States, but the surrender of the Japanese Empire following Hiroshima and Nagasaki eliminated any possibility of sending a new generation to the fighting front.

While it is true that WWII was already won before the Mexicans arrived, that was not their true motive for going. Mexico risked more than was necessary not merely to cooperate with a cause that many citizens supported—liberating the people of the Philippines, with whom Mexico shared a three-hundred-year history—but also to earn itself a place in the United Nations, and particularly to reestablish its relationship with the U.S. on more equitative grounds.

On November 18th  1945, they received a heroes’ welcome in Mexico City. When the train pulled in, hundreds of people were waiting there to see their returning soldiers. Surprisingly, Mexican historians showed little interest in the Squadron. In the U.S., soldiers of the Second World War became the greatest generation; in Mexico they were soon all but forgotten. There is only one survivor at the time of this writing: Carlos Garduño Núñez, 100 years old. When he dies, the extraordinary generation of which he was a part will have taken its last breath.

You can now read the history of the Aztec Eagles, 201st Squadron, in their first ever English-language biography:

The East L.A. Chicano Who Captured 1,500 Soldiers
A Brief History Of The U.S.-Mexican Border