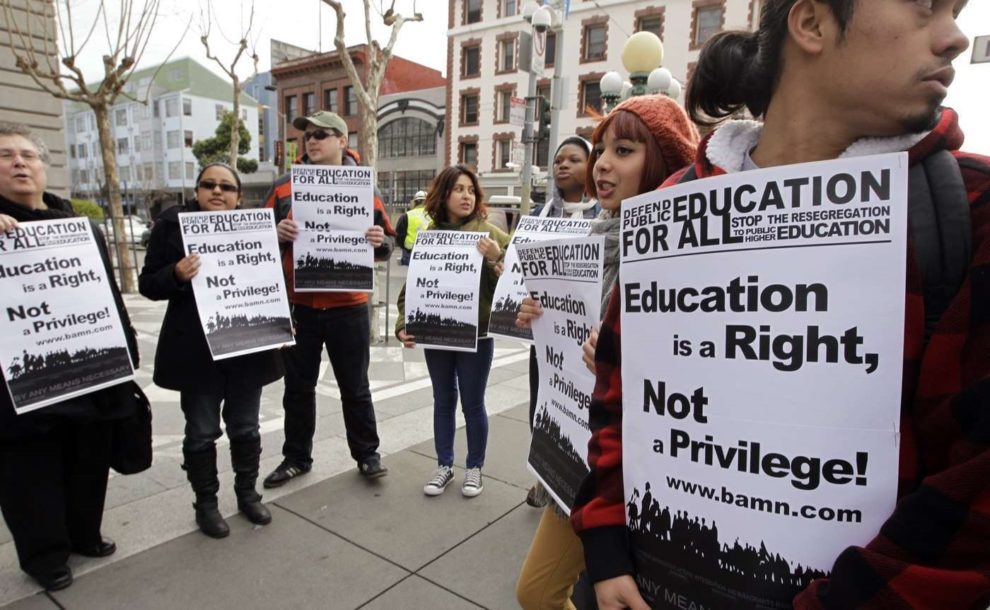 Almost 25 years since passing Prop 209, Californians are again thinking of reversing it.

As the University of California (UC) system gave preliminary findings last week of their entering class of college students this fall, a major achievement was felt by the Latino community: of the newly admitted undergraduate students for the fall term, the largest represented racial/ethnic group is Latino.

It is especially the case that newly admitted Latino students will now occupy 36 percent of the admitted student population at the UC system, followed by Asian Americans with 35 percent, and non-Latino Caucasian with 21 percent.

This is a welcomed moment as Latinos in California make up more than 50 percent of all students in grades K-12, with some counties having over 80 percent of their students being of a Latino descent.

The UC system is among the largest public systems of higher education in the world. It not only has a large student population, but also engages heavily in research and has a large operating budget.

Undoubtedly, the UC system has been considered a prestigious public system with many academic programs that rank above top tier private universities like Harvard University and Stanford University.

As a result, Latino students in the UC system, whether they come from California or are out-of-state, will benefit from this achievement for years to come.

However, the next hurdle for the UC system, and any other educational institution in California, will be determined in November when citizens of California decide whether to bring back “affirmative action.”

Affirmative action policies were in place at the UC system for many years (from the 1960s to 1995). And in a voter ballot in 1996, the citizens of California decided on Proposition 209, which ended affirmative action for the UC system and other public institutions in the state regarding admission decisions, financial aid, hiring, and student services areas like student advising.

Proposition 209 specifically prohibits the state from policies that discriminate against or grant preferential treatment on the basis of race, sex, color, ethnicity, or national origin. It applies to all state public entities, including governmental and educational institutions.

Proposition 209 seems like a nostalgic achievement as it offers equal treatment regardless of race, sex, color, ethnicity, or national origin, but many groups have suffered for generations from injustice and inequity.

In a 2018 Stanford University study, it was found that K-12 education in California is mainly dependent on neighborhood characteristics with wealthier ones having access to a better quality education than low income districts.

The effect of a poor K-12 system in college admissions is strong if universities only take a merit-based approach (such as with GPAs) and do not consider a holistic view which could include selecting someone’s race/ethnicity in order to not overlook an applicant’s qualifications and potential.

A study just published by the Office of the President of the UC system has shown that Proposition 209 has hurt underrepresented high school students from California in terms of not just lowering their enrollment at the UC system, but also by lowering their average income levels years after obtaining their college education.

We are indeed celebrating this year for the achievement of Latinos at the UC system but several studies, including a recent one from the UC Office of the President, have shown that this enrollment number could have been higher not just for Latinos but for other underrepresented groups like African Americans and Native Americans.

With this repeal, affirmative action policies in the state institutions will be left up to the U.S. Supreme Court.

As the nation wrestles with the COVID-19 crisis, racial issues of inequity and injustice have surfaced in every aspect of society. By deciding on Proposition 16, voters in California will get a chance to think about the fate of higher education in the state for underrepresented groups and move California into its next stage in history.