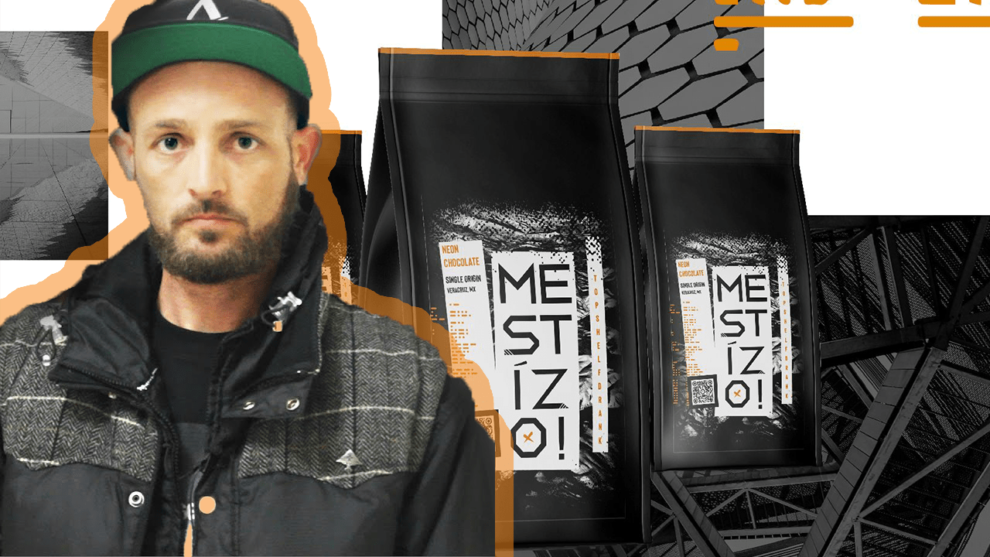 Daily Chela Staff dailychela
What do Chicanos, coffee, and the hip hop artist LMNO have in common? The answer is Carlos Aguilar's latest innovative product.

So-Cal entrepreneur Carlos Aguilar’s vision to blend two of his favorite crafts—hip-hop and coffee—merged naturally into his Mestizo coffee brand.

The come up was so organic that it attracted the attention of one of the West Coast’s premier lyricists, LMNO of legendary Los Angeles group The Visionaries.

“Even before sampling the product, I was just attracted to Carlos’s vibe,” said LMNO, on a phone interview to promote his collaboration with Mestizo, the limited edition single origin dubbed “The Ceremony.”

“I caught a few of the Morning Standup Joints,” he said, referring to Aguilar’s video podcast series promoting Mestizo. “It prompted me to reach out. Even before connecting the dots, I wanted to reach out and say `big up, I like what you’re doing.’ ”

“The Ceremony” is a single origin bean from Harrar Ethiopia, roasted by premiere Mexican American coffee roaster Brian Gomez of San Dimas, Ca. Only 123 pounds of Ceremony will be roasted for this exclusive flavor drop.

“Ceremony conjures the idea of doing something special and not taking what you’re going to do for granted,” said Aguilar, who introduced his Mestizo brand in 2020 with the mission to “make the world less whack.”

Aguilar has tapped into his extensive creative career to bring that mission forward. The San Gabriel Valley native has parlayed his writing work into multiple platforms, from MCing and poetry to cable network television credits. Hip-hop has been central to that career arc.

When LMNO made the initial contact, Aguilar responded with an idea: a blind taste test.

LMNO admits that he leaned towards Italian and French Roast, so he was pleasantly surprised when his preference wound up being the Ethopian roast.

“In a good way it messed me up. Like the development is real, the growth is real,” LMNO said. “I love Ethopian culture, but never was the hugest fan of the coffee. The fact that this one really struck me, I was like ‘This is dope.’”

The collaboration, which is available at mestizo.coffee, has yielded robust results. Aguilar curated a special “pack” for each order, which includes a limited edition Mestizo “Hecho” rolling paper, Ceremony magnet, a Goody Good Morning postcard and some cannabis seeds, which he describes as another substance we all might enjoy in communal ceremony.

The code also unlocks the dopeness that is “Bean Water,” a LMNO track produced by MadLib from the “10:20” Album.

LMNO recorded the track in 2010, after releasing his monumental 10-pack project, which featured 10 albums of new, original work.

“When I heard that beat, it automatically hit me, like “Coffee is going to save the day” and it sure enough did,” he said. “Coffee is (my) stimulant. It’s always been coffee and trees for me… I’ve always wanted to dedicate a song to coffee and that beat spoke to me. On some natural shit, I sent that song out to ‘Los, and I was like ‘I know you like coffee…’”

Like true MCs, you can call them the Masters of The Ceremony.

Kozmik Force: From The Rainforest To The Barrio
DMX Was Raw, Talented, Matched By Few