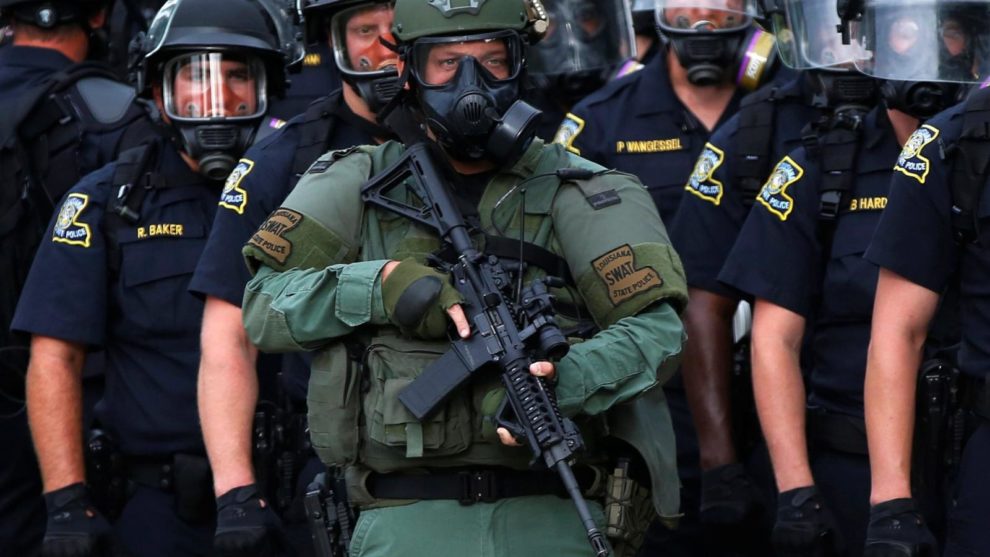 Fascism is already here, and we must defeat it if we’re ever going to be truly free.

I fear the day will come when I will be in a prison camp—a gulag, if you will—with my emaciated-yet-still-energetic child who will ask me what life was like before the fascist takeover.

I will tell them of the glory that was the 1990s, a decade in which the Soviets were trounced, the leader of the free world spoke on national television about not inhaling weed, and I first discovered how wondrous capitalism could be via the vast aisles of Costco Wholesale (not a sponsor…yet).

Yes, I’m the “peaked in elementary school” strain of sad millennial. But as much as I love reminiscing about the glory that was the 1990s, I don’t want to have to do it under the jackboots of fascists.

Tragically, camps already exist for some. They house immigrants and their children, and then there are the prisons that house black and brown people disproportionately, often due to systemic problems.

So there is racism, corporate control of government, vast inequality, and the fact that voting isn’t really a right anymore. Combine these ingredients with authoritarianism and the wholesale violations of the Constitution and other laws, and you have a feast of fascism.

Fascism is already here, and we must defeat it if we’re ever going to be truly free. Defeating it entails not only having a firm grasp of what it is and not just going after fascistic “Karens,” but realizing how to quell it right here in what remains of our republic.

Fascism is a feeling. Indeed, you knew your middle school gym teacher was a fascist. Or maybe they’re like the beach-town sheriffs as seen in the Big Lebowski, who won’t let a middle-aged hippy trip in their little communities.

Fascism, then, is indeterminate in many ways, which is largely why it’s so insidious. The ideology eludes concrete definitions, instead favoring reaction. But we know that it is inherently reactionary, rising out of the ashes of economic collapse and political crisis and pitching itself against liberal and socialist forces.

And we know that it combines the forces of business and government to congeal into a grotesque soup of elite domination.

Thus one can differentiate it in many ways from ideologies like conservatism and progressivism, which have certain assumptions about human nature and its interactions with the state and society in general. Instead, there are features, such as elitism, a blend of conservatism, focus on a strong man/authoritarianism, emphasis on nationalism, struggle, and a hearty anti-rationalism, according to Andrew Heywood’s book on political ideology.

In Italy and Germany, fascist movements were focused on renewed nationalism tied in with conservatism, and focused on defeating socialism. While there is the emphasis on the masses and state/authoritarian figure as a nation, there is the paradox that fascism invariably supports the interest of the elites and the propertied classes.

Indeed, without the support of the upper and middle classes in Germany and Italy and their fear of socialism, it’s unlikely that fascism would have been as successful, if at all.

We’ve observed this here in the states, as well as the macho obsession with struggle that’s so embedded in fascism (looking at you, booger boys who are trying to make Hawaiian shirts symbols of stupidity).

Here in the U.S. the president has the support of elite interests (Wall Street, defense industry), large swaths of the middle class, and those Pepe the Frog-loving boogaloo boys who couldn’t do the electric slide to save their lives.

Fascism kind of needs males, that masculine energy of late-teenage bro culture, emphasizing a common enemy and excoriating “weak” people, or these days, “cucks,” meaning anyone who isn’t like them.

There’s the emphasis on authoritarianism, street skirmishes, and a total disregard for true law and order. Yet there is a cultural consistency that binds all fascists together, even though the more polished fascists may have less vulgar sensibilities.

And let’s not forget how Trump’s fascism adheres to the racialism of Nazism, too.

The threat of fascism, and what it truly seeks, is complete and total domination of the political and economic system by authoritarian elites. Hence, it must be stopped. We know that conciliation does not work—fascists will take the whole mile if you give them an inch, which we’ve read about in Italy, Germany, and the states.

It would be nice if we had a robust and just economic system that provided for everyone and we weren’t in fear of economic meltdown at every turn.

It would be great if our political system allowed true representation and did not allow the president to win the election with the help of wildly unfair (and often illegal) and suppressive voting policies, but we have to deal with these factors, which these people are so adept at using for their benefit.

Fascists are all about optics, and manipulation of those optics. The street fights between fascists and communists in Germany were used by them to garner more support for “law and order,” of which they purported to be the stewards.

Trump is trying to do the same thing here. In Germany, the left was also divided between the Social Democrats and the Communists whom were not able to compromise on major policy choices, a split that was exploited by the Nazis.

Conversely, Norway was able to fend off fascists by adhering strictly to nonviolent, direct action (including strikes) against their own version of Nazis, even forming cooperatives that provided a semblance of economic vitality while also tangibly demonstrating to the populace that another form of politics could work.

The left was also able to compromise for the greater good of quashing fascism in their country.

Fascism is on our doorstep, which is terrifying. I want to see Bill Clinton play his sax on Arsenio instead of watching the current president diarrhea all over the Constitution, use the office for gain, and insult veterans and anyone else who’s ever sacrificed for this country.

There are ways we can defeat it, though. Different organizations are working on voting rights, stopping Republican voter suppression, creating ideas for economic growth and justice, and lobbying for a more robust democratic system.

But right now, moderates and the left need to unite and do everything peaceful we can to undermine this president and his ilk. I’d never thought I’d say this and this sounds cornier than Ben Shapiro reciting “WAP,” but America literally depends on it.

Opinion: Biden vs. Trump Is The Crossroads Nobody Wanted
Is America Ready For Universal Basic Income?