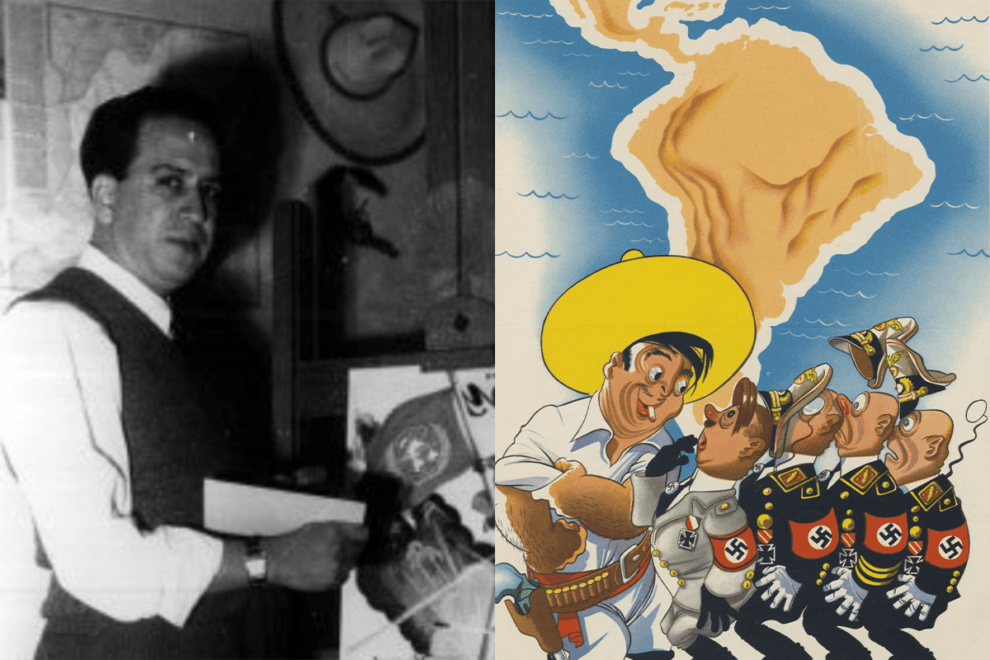 Gustavo Vazquez-Lozano
Antonio Arias-Bernal waged his own private war on Hitler and Mussolini, using only his cartoons.

In recent years, the history of Mexico’s participation in World War II through the valiant pilots of Squadron 201 has acquired new interest. The Aztec Eagles fought in the Pacific under the command of legendary Douglas MacArthur.

Less known is the story of another Mexican combatant who never wore a soldier’s uniform, left the American continent, got on a war plane, or held a weapon. What’s more, Antonio Arias-Bernal couldn’t scare a mouse. A former funeral home employee, he was short, skinny, and good-humored.

It was common to find him in the cantina with a bottle in his hand, laughing and chit-chatting with his powerful friends from the Mexican cultural milieu. When he put down the bourbon, he took up his pencil and drew Hitler or Mussolini in laughable poses, kneeling before a Mexican charro, and aroused more emotions than all the Mexican soldiers together.

Most surprisingly, he started his support to the Allied cause before barely anyone in Mexico thought the German premier was a threat to world peace. Some media started to call him “The Führer’s Scourge.”

From The Mexican Province

Antonio Arias-Bernal was born in Aguascalientes, a typical town on the central Mexican plateau, where to this day a city street bears his name. He started his career by secretly drawing inside the coffins that his father sold “to make the dead laugh.”

“Those dead guys must be pretty amused right now,” he declared years later during an interview. At the age of 19, he moved to Mexico City in an attempt to work as a painter or a cartoonist.

He debuted in women’s magazines, illustrating cooking recipes, but soon he moved on to more “serious” publications where he addressed political issues, not only of Mexico, but international as well. At the end of the 1930s, he began drawing lampooning Hitler.

Before Mexico entered the war on the side of the Allies, important politicians, academics and intellectuals displayed open sympathy for the Nazis. Some of them attacked Arias-Bernal, then 25, for his anti-Hitler covers in Hoy magazine. The magazine’s circulation slumped.

Three years later, when Mexico joined the war, Arias-Bernal’s face was on the pages of LIFE Magazine, he had the support of his entire country and even an invitation from the United States government to work in the war propaganda effort.

Alarmed by the penetration of Nazi ideology and enemy propaganda in the Americas, Franklin Delano Roosevelt established the Office of Inter-American Affairs in 1941 to encourage “the spirit of cooperation in the Americas in defense of the hemisphere.”

The organization’s objective was to execute programs in the fields of art, science, education, radio, the press and cinema “to promote national defense and strengthen ties among the countries of the Western Hemisphere.” In simpler words: to counter Nazi propaganda in the Americas.

The office was headed by Nelson Rockefeller, appointed directly by Roosevelt. While he was in charge, he relied on his relationships with radio networks, artists, and creators to popularize the culture of the United States in Latin America and vice versa. Again, in simpler words: to “meet propaganda with propaganda.”

Arias-Bernal’s work caught the office’s attention. He had the ability to take complex political issues of his day and break them down into a few strokes for popular consumption, and in addition to having a great sense of humor, he was rabidly anti-fascist.

That conviction caught the attention of the Office for the Coordination of Inter-American Affairs. In 1942 he got an invitation to visit the US and draw a collection of war posters.

Upon arrival, he was interviewed by The New York Times. Arias-Bernal commented that a year before the start of the war he detected, “an attempt to divide the American continent,” and explained that for this reason he directed his artillery against Hitler, Mussolini and Emperor Hirohito. His sympathies, according to his own testimony, were always with the Allied nations.

Even without knowing the scope of the atrocities in Europe, the cartoonist understood the danger that the Third Reich posed, ridiculed Hitler in his cartoons and received threatening letters.

For example, he drew Hitler trapped in a cactus with a butt full of thorns, or a gigantic charro showing him his muscular arm, or the Führer disguised as a woman, in a miniskirt, kissing a test tube marked “Aryan blood 100%.” He also staged imaginary battles between Mexican charros and Nazis. Arias turned Nazism into a caricature, and therefore a less fearsome force. He also depicted Churchill and De Gaulle as mythological heroes.

According to Hoy Magazine: “Until the arrival of Arias Bernal in Washington, propaganda, attempting to foment fear of the enemy, only served to glorify them. The intuition of Arias Bernal swapped that impression of chilling monstrosity for one of absurdity: a thousand times more effective.” As Life magazine put it, Arias-Bernal waged his private war on Hitler.

Arias-Bernal was of the bohemian type… he liked to drink, declaim poetry, sing, get together with artists, journalists and actors, have many friends and go to the San Marcos Fair in his natal Aguascalientes, where he mingled with the public. His friends called him El Brigadier, a moniker chosen for its similarity to the word briago, meaning tipsy.

But his works became highly valued and even according to some testimonies—which may be exaggerated—they were distributed from the air over Nazi-occupied France. In October 1952 he was awarded the Maria Moors Cabot Prize of Columbia Journalism School at the University of Columbia for his work focusing on antifascism and American cooperation and friendship.

In a country where many Mexicans doubted the utility of sending soldiers to the front, Arias-Bernal’s art sent its people the message that Mexico’s participation and support were needed to achieve the Allied victory. “In a way,” he commented, remembering his former job at a funeral parlor, “I continued to help run funerals. I like to think that I helped to dig more quickly the grave of Hitler and Mussolini.”

Arias-Bernal died prematurely in 1960 at the age of 47. The city placed his statue in the San Marcos Garden, the place where he liked to amble, but the bust was removed by the city council in 1970. He was forgotten, his works placed in dusty cabinets, until they were rediscovered and cherished again decades after his death.