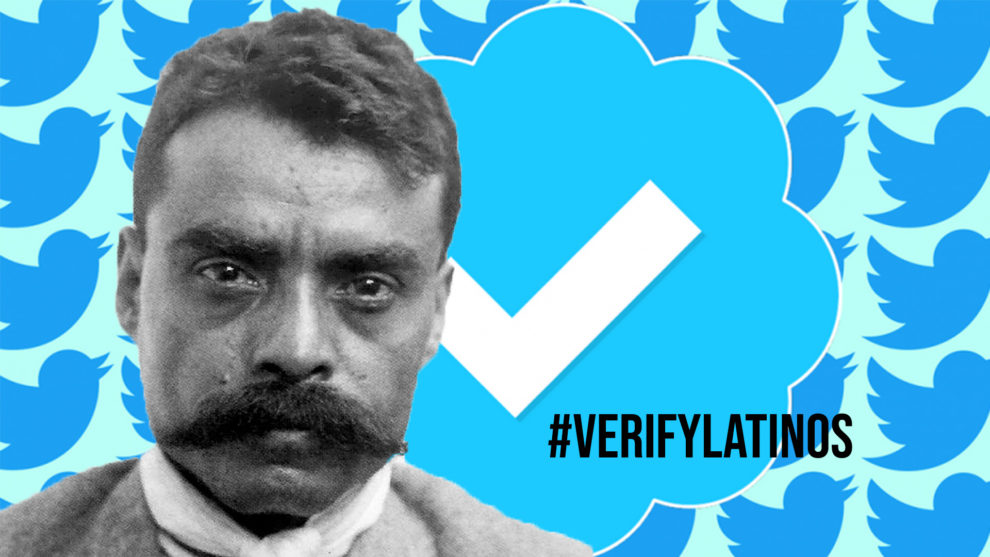 Brandon Loran Maxwell @brandonlmaxwell
Twitter sure seems to ignore a lot of Latinos when it comes to the verification process.

There is something odd about waiting to be deemed “credible” by some faceless, nameless tech bro who you have never met, but that’s exactly how Twitter’s verification process works. You watch, you wait, you wonder. And in the end, some get lucky and some don’t.

But if you happen to be Latino? Forget about it. Your odds of getting lucky are about as good as Stephen Miller on prom night. In fact, you probably have a better shot at Donald Trump giving you the presidential medal of freedom as a Latino than receiving the much coveted blue check mark from Twitter.

Don’t get me wrong. I’m not suggesting Twitter is secretly conspiring to keep Latinos from getting verified. I don’t think it’s that complicated. I do, however, think the cultural biases of Twitter’s homogeneous workforce have been programmed into the standards and algorithms that govern an otherwise diverse user base. And therein lies the problem.

I don’t have access to Twitter’s internal numbers, but the list of notable Latinos who have yet to receive a blue checkmark feels disproportionate when compared to non-Latinos working in similar industries. It includes everyone from syndicated cartoonist Lalo Alcaraz, to bestselling author Luis J. Rodriguez, to entrepreneur Patty Rodriguez.

Of course, there are a handful of verified Latinos who I didn’t mention, but it’s not nearly enough. The broader point is many of the people who I did mention are more than just run-of-the-mill “journalists” or “writers.” In many cases, they are the mainstream voices of the Latino community. They are the sole Latinos at the top of their respective fields and industries.

The potential ramifications are larger than you might think. Denying Latinos at the top of their respective fields an opportunity to be verified not only runs the risk of hurting their credibility, but giving the false perception to outsiders that no credible Latinos exist.

Take me. I have personally written for at least a dozen national newspapers and magazines, appeared on TV and radio, and even received a national prize from Writer’s Digest. By not verifying me, is Twitter implying I have no credibility at all? Not even a little bit?

My critics would probably agree with this implication (and by “critics” I mean that one guy in Georgia that always emails me). But this isn’t about me. I don’t care if I’m verified or not. Nor do I need the blessing of some mysterious Twitter employee to feel validated. I do, however, think that equal treatment is important. Particularly when I know people who have been verified for a lot less.

Twitter’s lack of clarity hasn’t helped. Twitter is anything but consistent on who they verify, how they verify, when they verify, and why. Even their own official verification page is almost two years out of date. Yet we know Twitter continues to verify people behind the scenes.

So what exactly is Twitter’s standard? The answer you get, depends on who you ask.

Others have suggested it’s influence. But this feels wrong too. Besides, the title “influencer” is thrown around awfully loosely these days. I haven’t heard of half the “influencers” I see online, let alone been influenced by them.

Twitter’s verification process isn’t really this subjective, clumsy, and broken, is it?

If so, it would explain a lot. For example, why a publication like Breitbart News is verified. After all, no credible verification process would place Breitbart News in the same category as NPR. Yet that’s exactly what Twitter has done.

In light of such a convoluted process, a piece of me wonders why we even need a verification process at all. At best, Twitter has merely erected yet another artificial barrier for Latinos to overcome (as if they didn’t have enough to overcome already). At worst, it has created a digital class system, in which Latinos once again find themselves on the margins.

It’s a strange place to be in. I’m not particularly fond of tech companies or hierarchies to begin with. But in either case, we’re here now, and a blue checkmark does exist. As a result, I think Latinos have a unique responsibility to demand equal treatment—or risk getting left behind in an ever-changing age.

“White Latino” Is A Flawed Term
Why Representation Matters