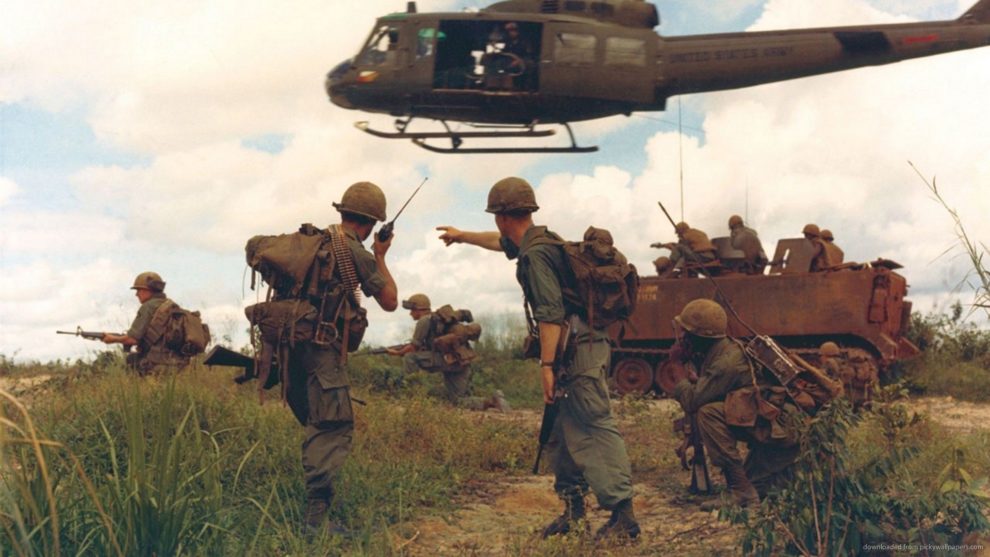 The following is an excerpt from the memoir “Through Smoke-Teared Eyes,” which was written by Chicano war veteran Johnny F. Pugh who passed away 11 years ago.

A couple more operations and a few casualties later, on a hot, humid day in the first week in September, our company was passing through another section of the Iron Triangle. While the monsoon season wasn’t over, it had wound down to sporadic daily showers, certainly not enough rain to ease our agony as we marched through the jungle. The merciless sun shone directly overhead, and after moving for just a couple of hours, we were exhausted.

The area we found ourselves passing through was particularly eerie, like some scene out of a nightmare. All of the vegetation and everything, I mean everything, was dead. The trees, the foliage, and the vines were completely stripped of leaves and had turned black. I figured it must be one of those places that the army had decided to defoliate with Agent Orange. It was spooky walking through a black jungle with nothing green or growing, like a curse had been put on it or something. The only good thing about being in this area was that Charlie was smart enough to stay out of it.

I didn’t even know why we’d been sent there, and I only hoped it wasn’t poisonous to us as well. I also noticed how quiet it was, devoid of any signs of insect or animal life. The jungle normally was alive with a symphony of bird songs, monkeys chattering, and the whizzing and buzzing of countless insects, except in battle zones or areas being bombarded with HE (high-explosive) weapons or napalm from above.

Man, they’re really fucking this country up, I thought, shaking my head in disbelief.

In order to get us through in a hurry, the CO had given an order permitting us to use the trails in this place. By now I knew better, and so I walked beside the trail nearly everyone else was using. I could get away with it because I was walking point again, and I was hoping that the rest of the men would follow my lead. Most didn’t, however, probably because they were too tired or lazy to want to blaze a trail around and through the trees, vines, and dry, scratchy bushes.

As a result, I was walking by myself, flanking them some thirty feet away, when suddenly I heard a boom and felt hot metal strike me in the cheek and left arm. I covered my cheek and hit the dirt, not knowing what to expect. I looked over at the trail where the blast had originated and saw three men lying on the ground. Two others were sitting down, holding different parts of their bodies. The men in back had taken cover as soon as they heard the blast, before everyone at the front of the line realized we had been hit. Turns out it was a Bangalore torpedo, most likely discarded by a lazy GI-perhaps Grimes-and then discovered by the VC, who planted it to booby trap us.

The Bangalore torpedo was a bulky, crude-looking weapon, a five-foot-long metal tube packed with enough explosives to blow a hole in the densest, most impenetrable jungle bush. Bangalores were routinely used to clear areas suspected of being booby trapped, regardless of the damage they inflicted on neighboring peasants’ homes and crops. In order to increase the range and power of the explosion, the torpedoes could be fastened together.

For instance, a couple of Bangalores at a time were often connected to each other, placed along the hedgerows, and set off to destroy whole rice fields. They also were employed to make a safe passageway for our company, as they generated enough shrapnel to clear an area about twenty feet wide. Of course, we had to take cover some distance away, so as not to catch any of the shrapnel ourselves. Secondary explosions could be heard as the VC booby traps inside were set off, and then all kinds of mangled objects could be seen flying through the air.

Suddenly I recalled an intense firefight our company had with some NVA who were using RPGs (rocket-propelled grenades), and seeing a boot go flying by about ten feet in front of me. I couldn’t remember the name of the poor fellow the boot belonged to, but his foot and part of his leg, up to the knee, were still attached to it. I’d been in-country long enough by then that things like that didn’t surprise me at all. Some things you never forget, I suppose. You may forget the operation, but never the incident, especially a memory like that.