Home » “This Fool” Is Funny Because It Has Depth 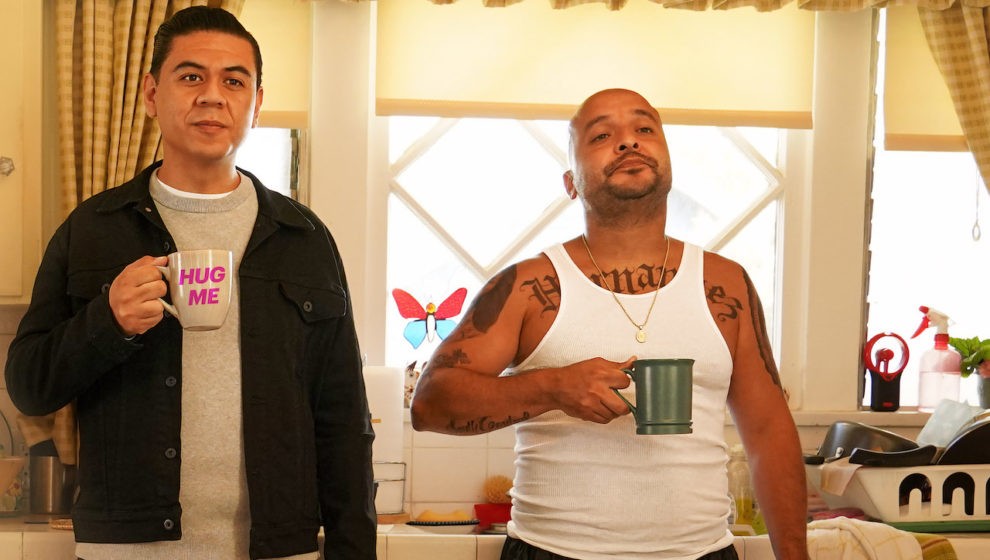 Watching Hulu’s new comedy “This Fool” is no foo’s errand.

That’s to say, you’re not tuning in to some crudely concocted corporate vehicle developed to cash in on “foo culture,” that sub-genre of screwball pranksta-ism generally identified with the social media brand known as “Foos Gone Wild.”

Instead, “This Fool” is a modern, self-aware, consistently funny-bordering-hilarious slow burn character study. While it treats all of its players as both targets and totems, its biggest mark is series lead Julio (played with convincingly nervous verve by comedian/series co-creator Chris Estrada).

Putting Julio at the center of this universe (foo-niverse?) is the first indication of the series’ aim to capture Latino culture through a purposefully critical lens. Julio is a pock faced walking bag of nerves, a 30-year-old, proudly self professing “punk ass bitch” who still lives at home with his mom. Stripped of his self-esteem, he knowingly fools himself into believing his life has purpose by holding down a job at “Hugs Not Thugs,” L.A.’s fifth largest gang rehabilitation center.

It’s all in the details with Julio, who some audiences might identify as a chipster, aka Chicano hipster. The morning ritual pour-over coffee, the punk rock posters and vintage tees, the existential dread. It’s all there working to establish Julio as the jerky slacker who might unironically punch in  “Latinx” as his cultural identifier on any digital form he fills out.

Julio’s refusal to break free from his self-imposed lock up manifests in all sorts of ways. He neither commits nor breaks up with his fed-up girlfriend Maggie (Michelle Ortiz, working overtime in a woefully underwritten role). He won’t leave the nest of his Reagan-fetishizing, amnesty recipient mom Esperanza (Laura Patalano, playing the role entirely in sharp tongued Spanish).

He’s also a stark contrast to his ne’er do well primo Luis, played by Cholofit cult legend Frankie Quinones.It’s worth noting there are a couple of similarities running through both Luis and Quinone’s viral sensation “Creeper,” the most obvious being the cholo prankster vibe both roles lean on heavily.

To his credit, Quinones establishes Luis as a separate entity. Luis offers a more visceral being, capable of violence but also empathy, that helps Quinones break away from his previous signature role. Whereas Creeper one day dreams of competing in the Crossfit Games, Luis is all about that action in the game of life.

Setting up the series as a quasi workplace comedy rooted in non-profit culture provides the plausible environment to congregate cholos, cholas, and thugs of all races, ethnicities and neighborhood affiliations. It also reveals the fraught nature of that work environment.

When onboarding an incredulous new recruit, Julio sternly explains that the homeboys first have to sell cupcakes in order to afford the cost of providing graduates with solar panel installation training.

There’s also the fragile egos of the folks who choose that line of work (Michael Imperioli is pitch perfect as Minister Payne, a noble but burnt out avatar for white savior complex).

Finally, there’s the straight effed up character flaws of the uber rich who randomly sprinkle some of their fortune fairy dust on these persistently desparate institutions (Executive producer Fred Armisen has almost too much fun in a guest role as a demented billionaire donor with an indecent proposal for Minister Payne).

The series takes a few episodes to get its rhythm. Episodes 1 and 2 establish the relationship between Julio and Luis, who is recently released from the pinta and permanently stuck in his peak year of 2005. We immediately get it that Julio is a prisoner in his own mind, while Luis has spent his hard time mentally free as a bird.

In those first couple of episodes, Co-Producers/Creators Pat Bishop, Matt Ingrebretson and Jake Weisman (who previously worked with both Estrada and Quinones on the Comedy Central series “Corporate”) and the writing team cram as many cultural signifiers for laughs as it can. The jokes come at an almost 30 Rock pace (“Edward James Olmos face” is introduced to the cultural lexicon; an ailing cholo sends his tap dancing, “West Side Story” loving son with Luis to get toughened up in a gang fight).

The series shows its growth beyond obvious cholo gags when it squeezes out time to explore Julio’s family. When Luis’s adorable abuela reveals a secret past as a murderous toxica outlaw, we start to see who the real gangsta in the family is. In another episode, a holy communion party enforces the family’s commitment to keeping up appearances, unwittingly revealing their ambivalence toward the Catholic Church. This plot twist winds up being one of the show’s most relatable and authentic Latino family experiences.

What prevents the series from becoming a running gag of one-trick foo jokes is Estrada, who slowly unravels Julio as a shallow and more often than not hopeless, wannabe good guy. His Hugs Not Thugs work is a means for him to feel superior to the homies that bullied him in the past and in the present. His failure to commit to the ultimately loyal Maggie is an extension of his “punk ass bitch-ness.” His eagerness to maintain his self-delusional “good guy” status goes so dark that he guilts himself into partying with his sister’s meth addict ex-husband.

For all of those who crave a more nuanced representation of Latinos in media, Julio might be that dude. Like El Pachuco in Zoot Suit, he’s a (deeply flawed and problematic) American Original.

Ultimately, “This Fool” does everything it can to avoid turning its cholo/thug characters into bufoonish memes. Unlike the guilty pleasure that is Foos Gone Wild, “This Fool” refuses to punch down.

It doesn’t necessarily punch up either, which isn’t a bad thing. If anything, it throws its chingazos sideways.

More importantly, when it comes to the serious business of making people laugh, it doesn’t flinch.