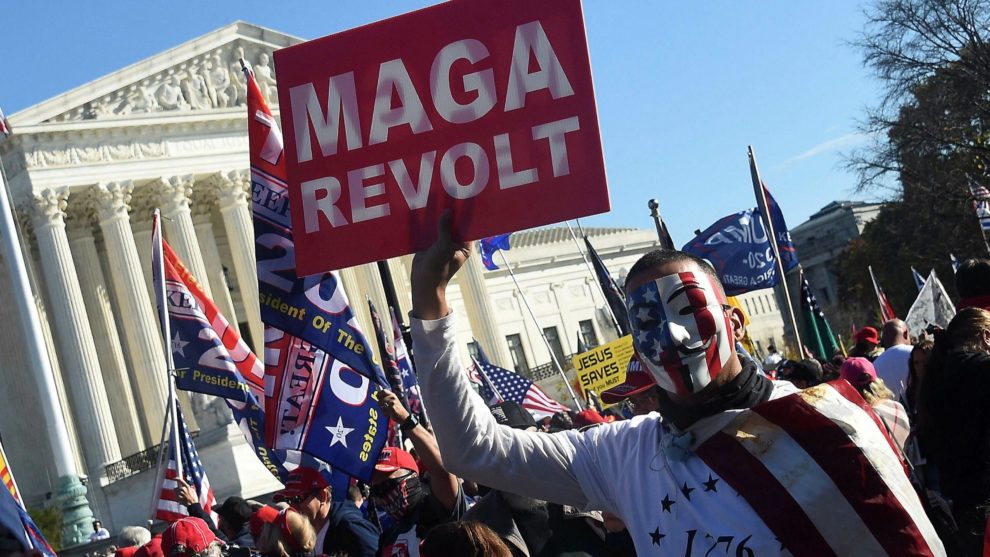 Brandon Loran Maxwell @brandonlmaxwell
If government officials colluding to overturn millions of votes in a democratic election is not an affront on our values, then what is?

It takes a disturbing level of conceit, denial, and disdain for American values to disregard multiple Supreme Court rulings and the will of millions of voters. But it appears House conservatives, who plan to challenge the electoral count this week, are equal to the task.

The move is the latest in a line of desperate attempts to discredit an otherwise decisive electoral victory that relegated Trump to a single term. Yet despite allegations of a “rigged” election by conservatives, actual evidence of systemic or widespread fraud remains negligible.

For many conservatives, however, contesting the election of Biden has nothing to do with pursuing truth. On the contrary, it has everything to do with wreaking havoc and exacting vengeance for the way Trump was supposedly treated during his presidency.

It is, among other things, the latest excuse to stonewall, obstruct, and reap moral equivalencies.

But the notion that Biden deserves to be treated poorly because Trump was treated poorly has always been a lazy equivocation. Trump, after all, launched his presidency on attacking immigrants, women, and accusing Obama of being born in Kenya. He was contentious and combative from the outset. Biden, on the other hand, launched his presidency calling for peace and unity. The difference can’t be overstated.

However, the antics mask a more intriguing and stunning political development: The public death spiral of mainstream conservatism. The regression from a philosophy that once centered around family values and limited government, to unbridled paranoia centered around everything from 5G towers to COVID vaccinations.

“The moral demise of conservatism is the inevitable consequence of tethering morality to a man with no moral compass to begin with.”

The spread of conspiracy theories hasn’t helped. Steeped in “deep state” propaganda, some conservatives have even begun to openly advocate for violence, becoming paranoid purveyors of the very destructive behavior they once claimed to oppose when pointing to loose-knit groups like Antifa.

In the past, both political parties at least agreed on the constitutional authority of the courts to resolve political differences. That baseline and respect for the constitution, however, has all but vanished under Trump. Then again, is anybody surprised? The moral demise of conservatism is the inevitable consequence of tethering morality to a man with no moral compass to begin with.

The transformation arguably threatens to initiate the largest ideological realignment in American politics since Reconstruction. But regardless of the shift, the notion that a handful of rogue conservatives should be able to attempt to overthrow an election because they believe they are somehow uniquely obligated or foreordained to save the country from itself is dangerous.

Ironically, Biden had the chance to contest the election of Trump in 2016 amid concerns from progressive Democrats. However, rather than get swept up in the contentious emotions of the moment, he chose to uphold decorum and fulfill his constitutional duty. He recognized there was still a line in the sand that shouldn’t be crossed.

Trump, of course, is less dignified. He believes the election was stolen and that he is entitled to another term. But masked behind his daily barrage of angry Tweets about election fraud lingers a stubborn legal truth: Allegations require evidence. And in the court of law, an irregularity isn’t evidence. A statistical improbability isn’t evidence. Hearsay isn’t evidence.

In fact, the only noteworthy omission to emerge in court since November is that Trump’s own legal team doesn’t believe the lies its spreading online or through press conferences. Likewise, the Supreme Court, which consists of three conservative Trump appointees, has shot down Trump’s claims twice with definitive 9-0 and 7-2 rulings (he’s lost another 50+ cases in state courts).

So why do conservatives seem so caught off guard by the onslaught of court losses? After all, anyone who understands the electoral process should know that coordinating widespread fraud in a federalist system where each state is independent and allowed to make its own rules regarding ballots is virtually impossible. The system was designed this way on purpose, and Trump is no exception.

None of this is meant to suggest that Biden is a flawless president-elect. He isn’t. However, that’s exactly what conservatives like Ted Cruz don’t seem to understand. Although Biden’s inauguration is only weeks away, this is no longer about Biden. This is about upholding longstanding American institutions and constitutional duties. Anything less is a failure of leadership and governance.

Immigrants Make America Great
Finally, Somebody Took The Keys Away