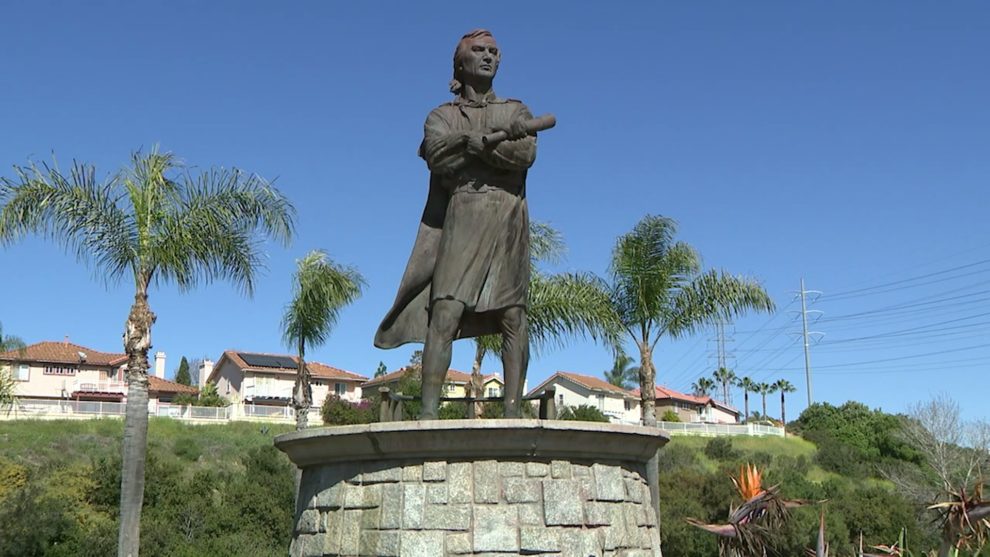 The struggle to remove a Columbus statue in Chula Vista highlights the importance of Chicano solidarity in the modern day fight for Indigenous sovereignty.

Update: On Tuesday May 25th, the Chula Vista City Council voted 4-1 to permanently remove the statue of Columbus at ‘Discovery Park’ and also voted to formally recognize October 12th as Indigenous People’s Day in the city. The Chula Vista City Council also approved the formation of a task force that will determine where the statue ultimately ends up, what will replace it, and whether or not ‘Discovery Park’ will be renamed.

Advocates for the statues’ removal, including the Kanap Kuahan Coalition have requested that the task force consider renaming ‘Discovery Park’ under the guidance of local Kumeyaay Native American tribes.

The neighborhood of Rancho del Rey may appear unassuming to the average person. Located in the city of Chula Vista, California—just south of San Diego—it bears little difference to other home developments that cropped up in Southern California during the late 80s and early 90s.

However, in this unassuming suburb, a controversy has been brewing for close to thirty years—a battle over a statue of Christopher Columbus that in an era of a renewed movement for racial justice and historical reckoning has finally come to a head.

It should be noted that Christopher Columbus never once stepped a single foot in what is now the continental United States, let alone California. In fact, his only foray on the continent of North America itself was in what is now present-day Costa Rica and Central America on his final voyage in 1502.

Instead, what Columbus is most known for is his first exploration across the Atlantic in 1492 to the so-called “new world,” when he and a fleet of ships first made landfall in the Caribbean on an island that the native Lucayan people called “Guanahani” (later renamed San Salvador by Columbus).

So with this in mind, it’s a bit surprising that a statue in San Diego, 2,642 miles away from where Columbus first made landfall, would be erected in the first place.

The statue itself was formerly located in Discovery Park at 700 Buena Vista Way, a twenty-acre public park mostly used for youth sports, community events, parties, and other assorted functions.

The bust was erected when Discovery Park first opened in the neighborhood of Rancho Del Rey in 1991, part of a then-new housing development constructed by the Corky McMillin Companies, the community developer behind both the neighborhood and the park.

The 8-foot bronze statue of Columbus which sat on a granite pedestal near the entrance of Discovery Park was installed to coincide with the upcoming 500th quincentennial anniversary of Columbus’ expedition in 1992. But while the debate over the statue has picked up steam in recent years, its presence has long been the subject of contention and debate since its installation.

Local Native American tribes and allies have called the statue a monument celebrating hate, theft of land, and the genocide of Indigenous peoples in the Americas. Residents and advocates in favor of removing the statue have long suggested that Columbus Day be renamed Indigenous Peoples’ Day like other cities across the country have done in recent years.

In Chula Vista, the most recent effort to have the statue removed and Discovery Park renamed has been spearheaded by the Kanap Kuahan Coalition, a coalition of Chicano and Native American advocacy organizations consisting of Unión del Barrio (UdB), AIM SoCal, and KOPA (Kumeyaay and original People Alliance).

UdB, in particular, has been very involved in organizing protests in opposition of the statue, underscoring the importance of Chicano solidarity in the fight for contemporary Indigenous rights issues in the 21st century.

Founded in 1981, UdB is a local, independent political organization based out of San Diego that grew directly from the Chicano Movement. The organization’s mission has been to “unify the collective power of raza workers, women & men, educators, students, barrio youth, indigenous communities, and prisoners…”

UdB also actively supports the struggles for freedom of people across Latin America, philosophy referred to as Nuestra América, encompassing the peoples of North, Central, and South America and the Caribbean, that “includes all peoples that share a common anti-colonial, anti-imperialist, and anti-capitalist history, struggle, and destiny.”

Armando Abundis, a twenty-seven year veteran of UdB that headed much of the organization’s involvement in solidarity with AIM SoCal and KOPA to have the statue removed explained UdB’s general position on the matter.

“As an organization, Unión del Barrio has always rejected the notion that this continent was ‘discovered,’ we are not a people that were ever discovered and therefore a statue of Columbus represents the preamble to brutal colonization that still takes place up until this day,” Abundis explained.

UdB officially began collaborating with members of the American Indian Movement and KOPA in 2018, following a 14-1 decision by the L.A. City council to replace Columbus Day with Indigenous Peoples Day as a municipal holiday and permanently remove a statue of Columbus from Grand Park.

Since then, Abundis and other members of UdB have been building friendships and relationships with other like-minded organization’s to have the statue taken down by legal means.

According to Abundis, the controversy over the statue at Discovery Park pre-dates recent protests in 2020, and even the removal of the Columbus statue in L.A., dating back to the statue’s initial installation in 1991.

Abundis recalled that the initial installation received little attention, but did catch the attention of one UdB member.

“There was a guy by the name of Carlos Pelayo who at that time was moving around in indigenous circles, and he mustered a group of people to protest the inauguration and mounted resistance to it.”

Pelayo’s campaign in 1991 wasn’t successful but kept the statue on UdB’s radar for the next several years.

The effort to have the statue of Columbus removed accelerated earlier this year back in February when the Chula Vista Human Relations Commission voted unanimously in favor of a resolution recommending that the statue be removed permanently.

Chula Vista’s city council was to weigh in on whether or not to remove the statue following the request, but COVID-19 restrictions during the pandemic prevented a public forum, delaying the effort.

For several months the issue yet again was placed on the back burner, until June when the city announced that the statue was being removed and placed in storage “out of public safety concerns”—just hours before a planned protest pushing for its removal was set to kick off.

For years, the statue has been the target of vandalism. Last year the statue was doused with red paint and sprayed painted with the word “genocide,” and prior to that, a bronze plaque set in front of the statue was also stolen.

Chula Vista City Councilman Steve Padilla made a statement regarding the statue’s removal saying, ”the statue has been a source of controversy over the years, including repeated instances of vandalism and protest. Many have asked for its removal, and given all that is happening nationwide regarding America’s legacy of racism, the city decided to put it in storage.”

Ultimately the city’s decision to stow away the statue came in the wake of national Black Lives Matter protests against racism and police brutality stemming from the death of George Floyd, a Black man who died after a Minneapolis police officer knelt on his neck for eight minutes.

Nationwide protests expanded, continuing a years-long effort to remove a number of confederate monuments as well as others honoring other forms of systemic racism, colonialism, and Indigenous genocide. With many either destroyed or removed, the city preemptively removed the statue and has since kept the statue tucked away in storage.

Abundis acknowledged that much of the progress in Chula Vista has been accelerated as a result of the nation’s broader political climate.

“If it wasn’t for the political climate around the country with Black Lives Matter and the murder of George Floyd things may have taken longer. You had a lot of young people of all colors, who had never thought of protesting who came out and united. That really helped us out to accelerate the process of forcing the city to remove the statue.”

For now, UdB and the Kanap Kuahan Coalition are continuing on with several other petitions to rename Discovery Park to a new name under the guidance of the Kumeyaay people and to reaffirm Columbus Day as Indigenous People’s Day.

“The city removed it based on the fact that we were threatening a protest the day they took it down. We’re not letting up because the statue has been temporarily removed. We need to make sure they don’t bring it back when they feel like the political climate of the country has changed.”

California vs Texas: Contrasting Beyond Ideology
5 Times Chicanos Revolted and Reshaped The U.S.