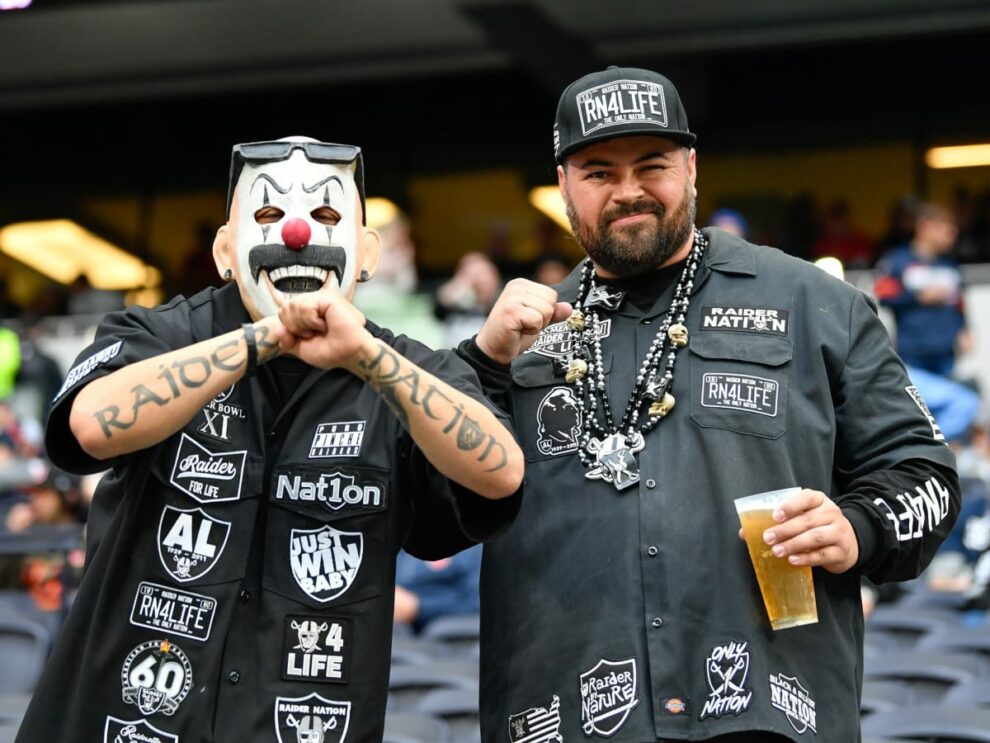 It’s been a tough season this year for Raider Nation so it’s with perfect timing that Andy Vargas, lead singer for Carlos Santana’s band, has given us a new anthem. Being a lifelong Raider fan myself, I was excited to get to talk to Andy on the heels of a spectacular Raider win against the Seattle Seahawks this past Sunday. Check the interview below, then check out the new Raider anthem, “Win City.”

KENNETH CASTILLO: Can you give us a little bit about your musical background and how you came to work with Carlos Santana?

ANDY VARGAS: I was raised in a musical family. My Dad Javier Vargas trained me musically and vocally in Mariachi music. I was inspired by great Spanish and American vocalists as well as R&B, hip hop DJ’s and artists. I knew music was my path.. I met some people in the music industry who ended up managing me.. We recorded some music that caught the ear of an A&R at RCA records. I signed on with RCA and collaborated with some of the best writers and producers in the music business.. Later during that process Carlos Santana released the single “Smooth”. Carlos was looking for someone to join the band and sing the rest of the album supernatural on tour. I auditioned for the spot and eventually joined the Santana Band 100%.

KENNETH CASTILLO: I know that you use to perform with your dad, Javier Vargas, in his Mariachi Band when you were a kid. Was he also influential in introducing you to Raider football?

ANDY VARGAS: Actually, it was my cousins who introduced me to the LA Raiders when I was a kid and it was then when I became a Raider fan for life. Followed them to our backyard in Oakland then, and now in Las Vegas.

KENNETH CASTILLO: When did you become a part of Raider Nation and do you remember when you went to your first Raider game?

ANDY VARGAS I went to my first Raider game with my cousins Issac and Ben. We went to the Oakland Coliseum. We lived in Watsonville, CA so it was super close. It was an experience I will never forget.

KENNETH CASTILLO: Who is your favorite Raider player of all time and why?

ANDY VARGAS: My favorite Raider is Bo Jackson. I loved watching him run the ball. I would always get super pumped when they handed him the ball. I was also super impressed that he was an all-star in both PRO football and baseball.

KENNETH CASTILLO: How did the song WIN CITY! come together and what inspired the timing of it’s creation?

ANDY VARGAS: One memory I will always have is driving to Oakland listening to the Raider theme song “The Autumn Wind” and how excited it made me feel. Since then I’ve always wanted to write a song for the Raiders. One that reflects the way I feel on game day and how I felt on my drive to the Blackhole. I got together with my producer Vision and artist Anthony Jordan formally known as 2Tone. We were writing songs and Vision had recorded this slamming live drumbeat. I hopped on the keys and guitar. I came up with the melody and said we need make this a Raider anthem and get the Nation to sing it!

I later started a new record label with George Lopez called Malaspalabras Records and new it was time to drop Win City especially since George is a major fan as well. Now we are excited to do our part in sending our energy and love to the Raider team, family and Nation.

KENNETH CASTILLO: Thanks for taking the time to talk to us and for this incredible anthem. I will be playing it before I watch every game. Regardless of our record, as always, WIN, LOSE or TIE, RAIDERS till I die.

Upcoming Artists To Watch In 2023
Lalo Guerrero: The Father Of Chicano Music