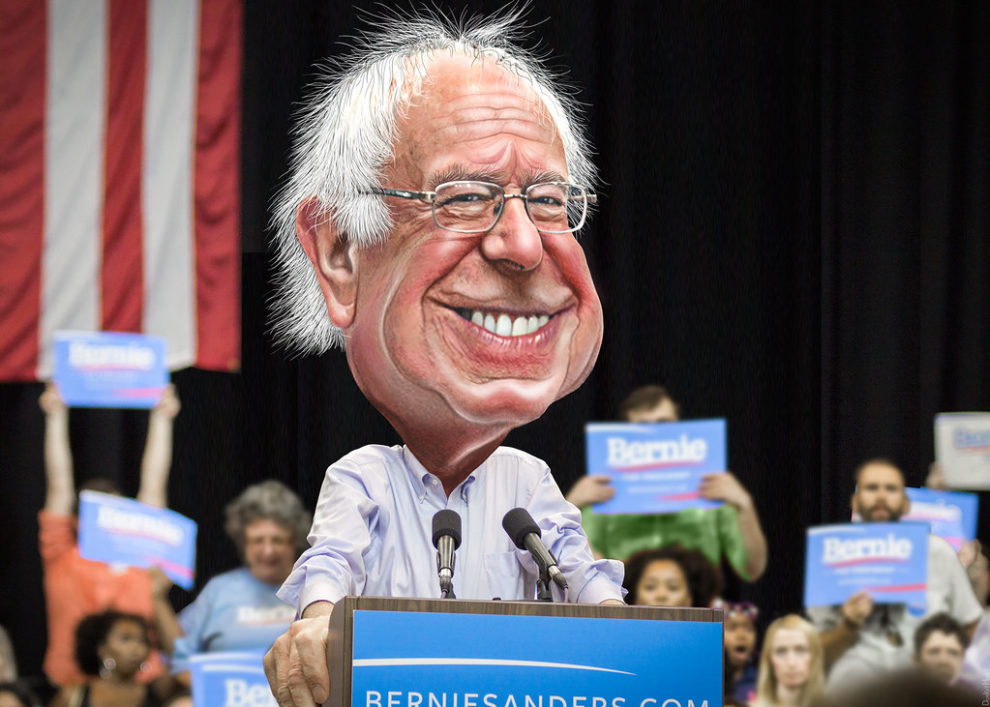 Leonardo Poareo nardrageous
"Bernie has the potential to benefit black and brown voters more than any other candidate in history."

There is only one distant cousin of Larry David running for president, and that person is Bernie Sanders. The Democratic primary front runner has committed his life to progressive politics, leaving no doubt as to his democratic-socialist credentials, even if some decry his newfound millions from book sales.

With a campaign pushing for a revolution, Bernie has the potential to benefit black and brown voters more than any other candidate in history, but only if he’s able to successfully implement his policies and avoid unintended consequences.

Sanders’s progressive history includes fighting for racial justice and LGBTQ rights. His proposals to raise the federal minimum wage, getting money out of politics, and Medicare for All continue this tradition.

His fundamental push is that our country’s problems can be reduced to wealth inequality, which has a mutually causal relationship with money’s role in politics. A Green New Deal and worker vigilance are part of his main strategies to bring economic and political democracy to this country.

Latino Democrats are supportive of Bernie, likely despite his call for a revolution. This is not surprising when considering his policies that like Medicare for All and immigration. His plans include a DACA-like plan to stop deportations, a slicing of ICE, and upending the system of mandatory minimums that have wreaked havoc on black and brown families. Not to mention the legalization of weed.

There is also his widespread support of unions, of particular interest to union Latinos in the gaming industry in Nevada, and in the hotel industry in California.

Chief among his strategies to implement some of these policies is his proposed reliance on executive orders, continuing in the footsteps of Obama and Trump The difference with Sanders is that he’s not relying on this system for the proposed changes, instead relying on organizing to build a movement among the working and middle classes.

This broad-based movement would serve as a check on corporate power and a check on representatives that might not support such policies.

Using executive orders while simultaneously forging a class consciousness is a potentially perilous strategy, however. For one, Bernie’s implicitly admitting that his presidency is part of a longer process of revolution, which may actually dishearten supporters if they don’t see results in their desired timespan.

Bernie will also be facing monstrous obstacles from the GOP, who will rabidly oppose anything he does, as they have in the past, regardless of ideology (see the centrist Obama administration, 2009 to 2017).

This is not a disqualifier, as someone like Bernie may be more likely to enact policies than a moderate like Klobuchar or Biden, who lead with compromise. Bernie has not promised to compromise with the GOP, who are obstructionists at this point, because he realizes that they have zero interest in bipartisanship.

Moderate Democrats may also obstruct him, but they would be unwise to do so, as they would be playing into Republicans’ hands.  If Sanders is able to have a broad base of support that will influence other Democrats (as Trump has done with GOP congress people) and dissuade them from turning against him, he won’t have to temper his progressive policies.

The other candidates running in the primary won’t do as much for black and brown voters as Bernie, and they won’t be able to rally the vibrant base that he’s been able to at this point.

The GOP fears Sanders because they know that unlike the rest of the field, he’s creating a coalition that relies on class consciousness, and if there’s one thing the GOP’s been desperately working on, it’s preventing people from realizing their class position and commonalities shared by their fellow class members.

And they know that such an energetic class-based movement faces a far greater chance of long-term success than moderate conciliation from the likes of a Joe Biden.

It’s important to realize that Sanders is not the savior of black and brown people, however. Sure, he’s been an ally for decades, and out of all the candidates, he has the greatest chance of breaking the GOP’s and moderate Democrats’ control of the status quo.

But every revolution has a counter revolution, so if Bernie’s base can’t use local and state politics to exert pressure on the system, upend the two-party duopoly, and end the reliance on rule by executive fiat, a successful counter revolution can arise and take us back farther than we ever imagined.

Not to mention the possibility of progressives using their power for corrupt purposes. Still, black and brown voters have no better gamble to make.

Is Trump A Bigger Threat Than COVID-19?
We Are A Lost Nation That Needs To Remember Our Identity