Home » What Exactly Is “Latino”? How I Reclaimed My Borderland Roots 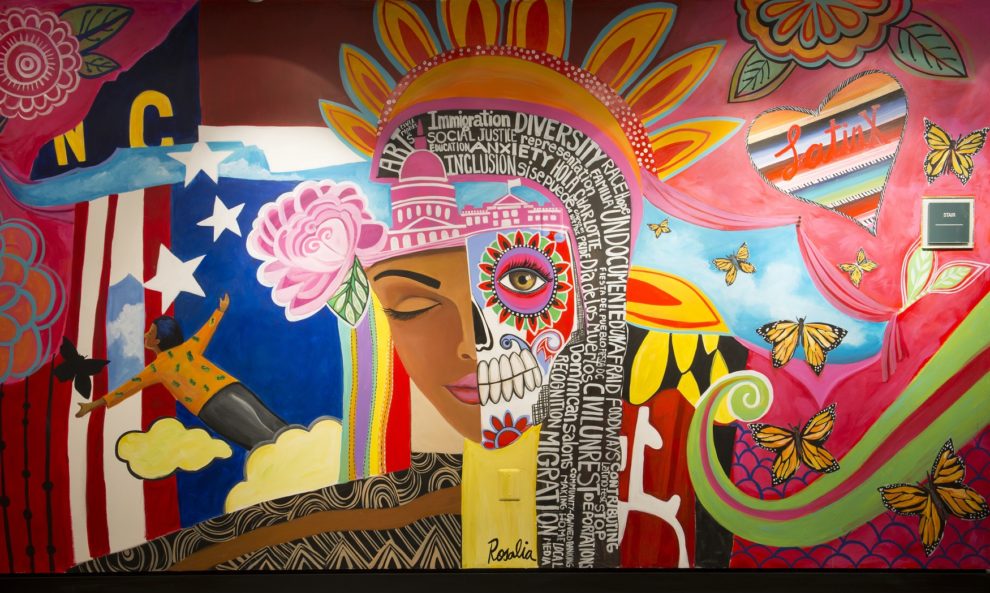 Lucy Tambara
I am not interested in having a place at the table, I want to build my own.

My family holds dear the lessons of the Mexican Revolution. My great grandmother despised Pancho Villa. Family lore is that she attended Catholic mass every morning to pray for an end to the revolution.

Revolutions of the past were fought by the wealthy and intelligentsia at the expense of the poor.

As a consequence, the word Mexican is still uncomfortably uttered in my family. Two generations later, I asked my mother if she identifies as Latina. She shook her head and said Latino is the new nationalism. I always heed the prophecies of the elders. I took what she said seriously.

This past Sunday journalist Julio Ricardo Varela reported that the U.S.’s potential first lady, Jill Biden, stated at LULAC, “I guarantee you Latinos will have a place at the table.”

It is one thing to proclaim the term “Latino” as a personal cultural moniker, but it is entirely another to organize and homogenize individuals by defining their communities. This term erases people like me who are from the borderlands and have Native blood. I am not interested in having a place at the table, I want to build my own.

What makes the term Latino problematic in politics and corporate print culture is that these terms are discussed in relation to the nation. This relationship to the nation sustains nationalism, colonialism and alienation of Native and borderlands people.

The Latino vote. The Latino community. Latino or Latinx? As a Chicana Japanese, I look to corporate print culture and U.S. politics in utter confusion. Who exactly is “Latino”? The term Latino without critical analysis homogenizes the diverse cultures and histories that comprise the people of Latin America and the Caribbean.

The term Latino is not equipped to handle the reality of movement. There are Japanese for generations who have called Latin America their home. There are Mexicans who are born in South Asia.

The idea of nation is rooted in 19th century Western colonialism. Colonialism is an ongoing and  invasive system led by the elite which attempts to destroy native languages, cultures and the societal fabric of spaces around the world.

Tom Niarn in his book, The Break-up of Britain wrote on the effect of nationalism on marginalized communities in the Western Hemisphere.

He asserted, “The arrival of nationalism in a distinctively modern sense was tied to the political baptism of the lower classes… Although sometimes hostile to democracy, nationalist movements have been invariably populist in outlook and sought to induct lower classes into political life. In its most typical version, this assumed the shape of a restless middle-class and intellectual leadership trying to sit up and channel popular class energies into support for the new states.”

I did not hear the term Latino or even Latinx until I entered a university. I heard Hispanic, Central American, Chicano, and Mexican. But, never Latino.

There appears to be a class marker in this terminology. In December 2019, there was a Pew poll that revealed that only 3% of people identify as Latinx. This makes sense considering that the term Latinx is a relatively new term.

Every twenty years or so, new terminologies to label people emerge. In the 1970s, the term Hispanic was created. In the 1990’s Latino came to fruition. But having lived in poverty my entire life, I don’t hear people in my community using the term Latino.

Cultural critic Roland Barthes noted that when terminology becomes a repeated symbol, it creates alienation for those who fall outside of its societal meaning. He wrote, “Mass society always tends to get stuck on defined names, and separated meanings.”

When concepts become stuck then it does not allow for new ideas, cultures, and identities to be born. This mindset can also breed authoritarianism. Part of living in a democratic society means embracing not just change, but inclusion. The ways in which we discuss society must be open and flexible.

This term in its attempts to connect people who connected through Latin America is also a false attempt at unification. When politicians or journalists refer to communities along the borderlands as Latino communities this is what Benedict Anderson refers to as an imagined community.

Anderson argues that the rise of vernacular languages that grew from Latin helped to pave the way for nationalism. The concept of community is in actuality your neighbors, relatives and the businesses you frequent. It is impossible to know every single “Latino” because who exactly are Latinos?

Communities are far more diverse than is currently depicted in print and in politics. For instance, my Japanese father was raised in the Los Angeles enclave of El Sereno. To outsiders it is historically a Mexican American space. But for those that know the history of the area, Japanese Americans after incarceration moved into El Sereno and neighboring Boyle Heights.

Should we even care what terminology is placed on us by those in charge? If it mitigates a more inclusive society, then, yes. In my own writing, I have been cautious with terminology. I refer to enclaves simply as communities. For groups of people, I will say Black, Brown, Native, South East Asian, and Eastern Asian.

In interactions with people, I always ask them about their identifiers and pronouns. Is this a lot of work? Of course. But when interacting with others, you should always assume you are an idiot in the room. Maintaining democratic ideals is hard work, but the liberation that comes with it makes it worth the fight.

This chapter in the U.S.’s tumultuous history has taken me on a journey. I’ve fully reckoned with my past. I used to identify as Asian Latina. But that was a denial of my family history. I was repressing the memories and the pain of my grandmother’s Luz’ death. I did not attend her funeral. My family had cut-off contact with her when I was 4. I reunited with her prior to her death due to the urging of my Japanese grandfather who wanted me to heal the wounds of the past.

When I was 27,  we shared our last meal together at 7 Mares Restaurant in Montebello, California. Over decadent cheese enchiladas, beans, and rice and our shared favorite beverage, horchata, she reminded me, “You are a child of no nation. You are first and always a child of the borderlands.”

Instead of attending her funeral a few years later, I spent time traveling alone along the U.S. and Mexico border to reckon with my past. My time spent traveling, I learned that I wasn’t Latino or even Hispanic—I was from the borderlands.

I always yearned for the freedom of movement and love of community. It’s in my DNA. Here’s to creating a world that is free, open and inclusive.