Home » A Brief History of the Virgen de Guadalupe 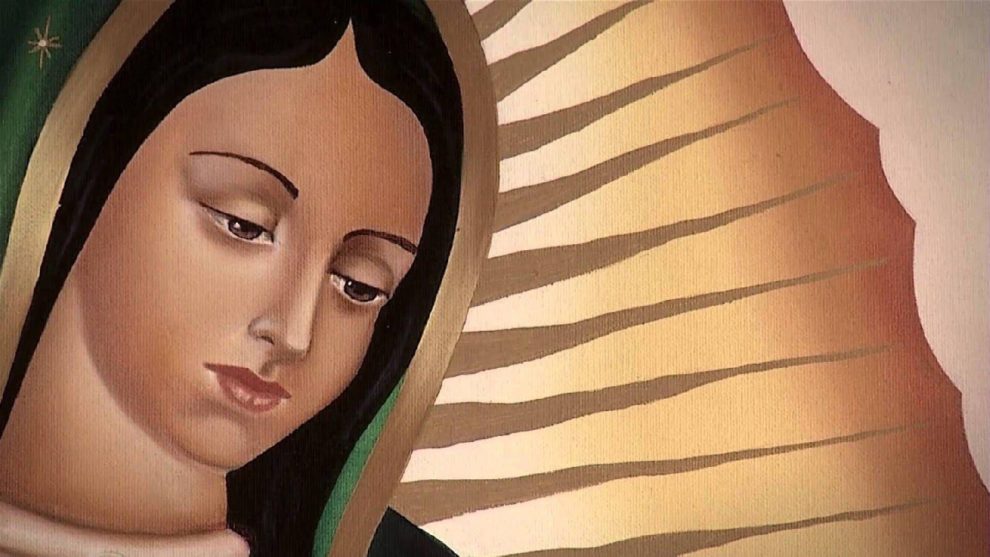 Roberto Camacho
From churches to street walls, the Virgen de Guadalupe is a near-universally revered figure in Mexican culture.

As the year draws to a close and the yuletide season approaches, the month of December is an important month of significance to the practitioners of many different faiths and denominations throughout the world. This is particularly true for many followers of the Roman Catholic faith.

The beginning of the month marks the start of Advent, a season observed by Roman Catholics marked as preparation for the celebration of the Nativity at Christmas and celebrating the return of Christ as well. Needless to say, the season is peppered with variety and nuance among different celebrations. Mixing Christian and pagan traditions across different churches and regions, as well as contrasts between western and eastern orthodoxies.

However, for millions of Mexicans that practice the Roman Catholic faith, the 12th of December also marks another celebration of significance within the church, the feast day of the Virgen de Guadalupe.

It’s hard to understate just how omnipresent Catholicism is in much of Mexican culture. In fact, in many ways, religion has such sway amongst the Mexican diaspora that it even holds influence on aspects of non-secular Mexican culture as well. And perhaps nowhere is that more prevalent and obvious than the iconography of the Virgen de Guadalupe. A Catholic title of the Blessed Virgin Mary, the mother of Jesus Christ.

It’s an understatement to say that the Virgen de Guadalupe is a near-universally revered figure in Mexican culture. Whether found inside the walls and stained-glass windows of churches or captured in paint and brush strokes across thousands of murals, to the countless tributes rendered in ink on the body art of millions. Or even inside of our parent’s and grandparents’ homes, her image and likeness can be found practically everywhere throughout Mexican culture.

A figure instantly recognizable, and a common sight for many of us growing up. This of course is not by accident. In fact, many historians cite the Virgen de Guadalupe’s origin story which dates back to the 16th-century in colonial-era Mexico as a pivotal moment in Catholicism taking root in Mexico and becoming the dominant religion of the land for both Spanish colonizers and Indigenous Mexicans alike.

Even following the conquest of Tenochtitlán and the fall of the Mexica Empire, in spite of multiple concerted efforts by the Spanish to convert the Mexica and other Indigenous nations (oftentimes by violent force) many Indigenous Mexicans still practiced the religious ceremonies and traditions of Pre-Columbian cultures in Mexico.

According to legend, in 1531 a Nahua man, a Catholic convert who had been baptized as Juan Diego witnessed an apparition of the Virgin Mary on four separate occasions at the hill of Tepeyac. A then-rural area on the edges of Mexico City that was formerly the site of the temple of the Mexica goddess Tonāntzin, which was destroyed by the Spanish nearly a decade earlier in the conquest. The Virgin Mary spoke to Juan Diego in his native, Nahuatl tongue and instructed him to go to the bishop and build a church on top of the hill of Tepeyac. Saying that doing so would protect the Mexican people. Juan Diego went to the archbishop, Juan de Zumárraga, but was rebuked by the skeptical bishop who dismissed the encounter due to lack of any proof. Again, the Virgin Mary appeared to Juan Diego several more times with the same message.

Several days later Juan Diego’s uncle, Juan Bernardino had fallen gravely ill and Juan Diego was sent to bring a Catholic priest to hear his Uncle’s final death-bed confession. In order to avoid being delayed by the Virgin once more, Juan Diego chose an alternative route around the hill of Tepeyac, but the Virgin again intercepted him and asked where he was going. After explaining his ordeal, the Virgin assured Juan Diego that his uncle would recover and instructed him to climb the hill of Tepeyac.

Following the Virgin’s instructions, upon returning to the top of the hill Juan Diego discovered a bed of Castilian roses (which were not indigenous to Mexico) blooming on the barren hill in the cold month of December. The Virgin instructed Juan Diego to wrap the flowers in his tilmàtli (sash) and take them back to Bishop Zumárraga. When Juan Diego returned he opened his tilmàtli before the archbishop. The flowers he had gathered on the hill fell to the floor, revealing an image of the Virgin Mary depicted as a beautiful, Indigenous maiden embellished onto the fabric of his tilmàtli. Since then the image has been known as Our Lady of Guadalupe.

While the actual historical accuracy of the account has been questioned over the centuries, with several differing variations, many historians point to the elements of the Virgin appearing to Juan Diego, an Indigenous man (as opposed to a Spanish priest or clergy). Speaking in Nahuatl and manifesting herself as an Indigenous or mestiza woman as the turning point for Mexico’s Indigenous populations warming up to Catholicism which was being imposed by Spanish colonists throughout the nation. In the coming years for better or worse, millions of Indigenous Mexicans would be baptized or converted into the Catholic faith as a result.

Likewise, the Virgin’s appearance at the former site of Tonāntzin’s temple at the top of the hill at Tepeyac also further fed into the religious syncretism of incorporating Roman Catholic religious traditions and Indigenous practices and beliefs creating new blended customs. Today hundreds of fiestas are held all across Mexico on December 12th for Día de la Virgen de Guadalupe, with thousands of Catholics from throughout Mexico and around the world making pilgrimages to the Basilica of Our Lady of Guadalupe. The shrine itself stands on the original site on Tepeyac Hill in Mexico City. Today Día de la Virgen de Guadalupe is a national holiday in Mexico and also celebrated across the Southwestern United States as well other parts of the nation with large Mexican communities.

Today, ​​in cities throughout the country there are celebrations dedicated to Día de la Virgen de Guadalupe. Many are accompanied by processions and floats decorated with colorful flowers followed by parishioners carrying images of the Virgen de Guadalupe. In many places Mexica dancers donning colorful regalia, burning fragrant sage join in the processions as well. While children posed around cacti and radiant flowers reenact the scene of Juan Diego kneeling before the Virgen. Despite Catholicism’s fraught and oftentimes complicated relationship to Mexican history, for many, the Virgen de Guadalupe remains a symbol of hope, community, and belonging.