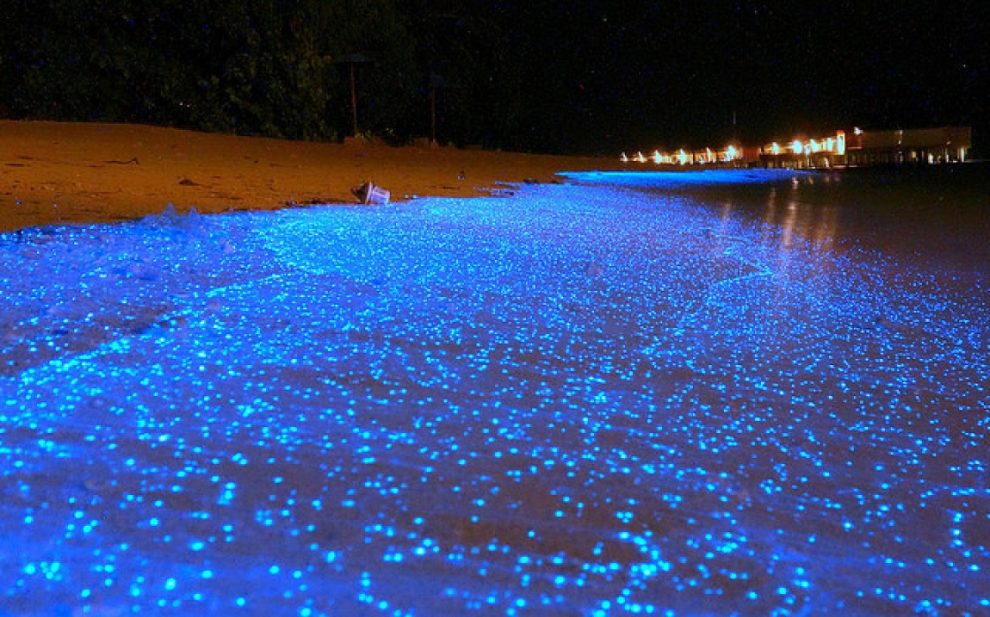 A favorite childhood pastime for many of us was capturing fireflies, or “luciérnagas,” in the summer. Whether we got them with a net or with our bare hands, we put them in jars to use as lanterns or “faros.” The emitted light is an example of bioluminescence produced by living organisms.

However, there is another type of bioluminescent organism with a more direct impact on Latinx communities living in the tropics or subtropics, and it is an amazing microscopic algae called Pyrodinium bahamense.

Pyrodinium bahamense algae are bioluminescent marine plankton that can be found in the waters of the Caribbean and Gulf of Mexico, and the coasts off of other Latin-American regions. This species, a type of dinoflagellate (a two-tailed organism), evokes a response of awe and wonder from the locals in the night, with its warm, blue light in places such as the Bahamas, Puerto Rico.

There, bioluminescent bays are major draws for tourists, who typically go on guided kayak tours through the mangrove trees to view this natural phenomenon.  The benefits from this experience are twofold: the tours contribute to the local economy and provide an opportunity to educate the public on the preservation of this unique community.

Beautiful spectacles aside, bioluminescent algae are not all fun and games. There is a danger lurking in their tiny cells. Bioluminescence in the bays can also predict a massive public health concern. How?

The algae release intracellular toxins, known as saxitoxins, into the environment. Low quantities of these toxins pose no threat, but environmental issues arise from blooming events, when P. bahamense grows exponentially and rapidly. This happens when there are more nutrients and the water temperature is warmer (usually 22 °C or 72 °F). This phenomenon is projected to increase with the advent of climate change.

More P. bahamense algae means more food for bottom feeders like clams, mussels and fish. Unfortunately, the algal toxins don’t just disappear with consumption, they accumulate in the tissues of these animals and cause massive die-offs, along with physiological and neurological issues. Contaminated seafood is a concern because it has implications on human health.

Remember the main type of produced toxin, saxitoxin? It’s a neurotoxin and impacts the nervous system, leading to a condition labeled paralytic shellfish poisoning (PSP) when contaminated seafood is consumed. The toxins bind to the sodium channels of the nervous system, resulting in a tingling sensation, difficulty breathing and even death, depending on the level of toxicity.

Out of approximately 1410 cases of PSP from 1970 to 2016 in Latin America, 819 were caused by P. bahamense, as detailed by a group of researchers in Mexico. The affected countries were Mexico, Costa Rica, Guatemala, El Salvador, and Nicaragua.

Not all P. bahamense behave the same, as it was once thought. Scientists and algal experts used to classify these algae into two varieties based on toxin production and geographic location. The first variety (P. bahamense compressum; PBC) was described as a toxin-producer living in the Indo-Pacific, but the second variety (P. bahamense bahamense; PBB) was assumed to not produce toxins.

However, a recent study re-examined the algae and found no consistent physical differences between the varieties, but did find some genetic differences. Curiously, the PBB variety could still produce toxins, at least when grown in culture.

More studies are needed to focus on the factors leading to P. bahamense blooms and their distribution across the Pacific and Atlantic Oceans. Prior research on the cysts or vegetative cells of this species, suggest there may be a link between heavy rainfall, accessibility to key nutrients, and changes in surface ocean temperature, that influence rapid P. bahamense growth.

You may be familiar with massive oceanic events resulting from changes in ocean temperature, like El Niño (warm oceans) and La Niña (cold oceans), and P. bahamense blooms are one of them. Scientists are actively monitoring the impacts of these events in the bioluminescent bays of Puerto Rico, after Hurricane Maria.

Although we know that these algae are crucial toxin producers, it’s difficult to study their toxin profiles and chemical composition due to lack of sufficient sampling data, research studies and public funding.

Non-profit organizations, such as the Vieques Conservation and Historical Trust of Puerto Rico, work with the Department of Natural and Environmental Resources to collect scientific data and engage with the public about bioluminescent bay conservation. However, more coastal monitoring programs are needed to help us understand these blooms and potentially lessen the severity of future shellfish poisoning events.

Melody Aleman is a first-generation college graduate. She received a Bachelor’s of Science degree from Millersville University of Pennsylvania, with a concentration in Marine Biology, in 2017. She is currently pursuing a PhD. in Marine Biology and Biological Oceanography from the University of Southern California in Los Angeles. She studies ecological interactions between marine bacteria and viruses. Melody is passionate about promoting diversity in STEM and hands-on education in marine science.