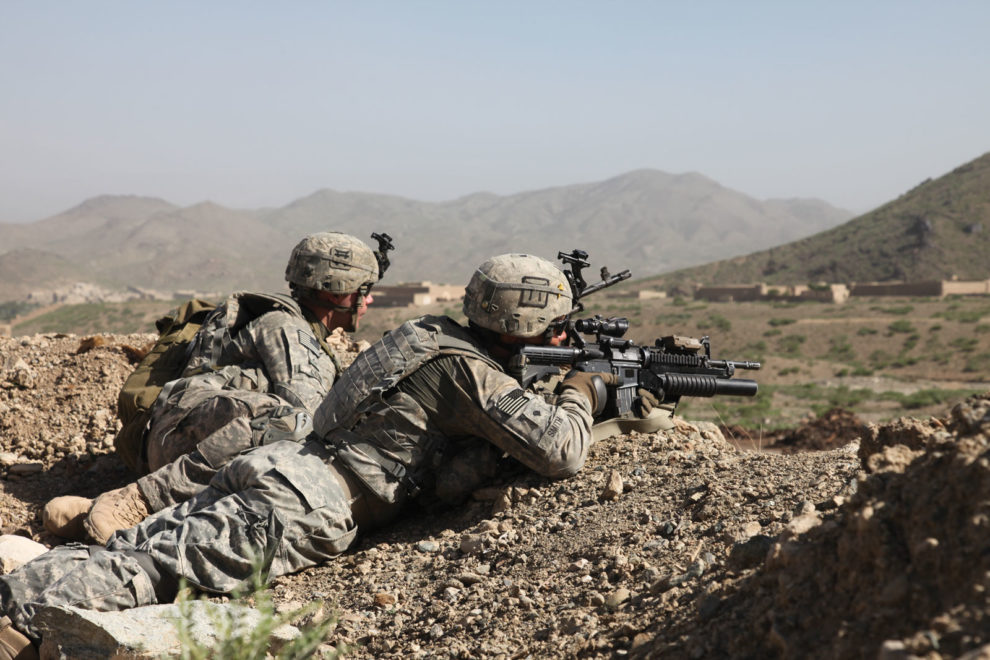 For years, Democrats were complicit in poor U.S. foreign policy. Now they have a chance to fix it.

We’ve been in Afghanistan for almost 20 years, and all we have to show for it is deaths of civilians and military personnel, lost opportunities, and the return of the Taliban. Didn’t U.S. forces rout the Taliban years ago? Mission accomplished, right?

Wrong. U.S. troops stayed. The release of the Afghanistan Papers details the generation-long imbroglio from the perspective of key decision makers and advisors, and further demonstrates the complicity of both political parties in pursuing interventionist policies oversees.

For the majority of this century, the Democratic party’s complicity in pursuing senseless foreign interventions has caused instability abroad and at home, an instability that progressive leaders are trying to—and must—fix.

With its release of the  Afghanistan Papers, the Washington Post doesn’t come close to revealing any bombshells about the seemingly never-ending debacle, but what it does reveal is the utter aimlessness with which a massive nation-building endeavor was managed.

Reading their summary highlighting major quotes by officials involved, one could have been forgiven for believing that military leaders were whiling away their days on scenic tours of Asia Minor. Democrats may finally be pushing for a full withdrawal of U.S. troops, but only after subsequent years of immense failure. Better late than never, but pushing for a full withdrawal at this point takes about as much courage as professing your wokeness on Twitter.

All of this illustrates the fact that the major military interventions of this century have all happened with the support of the Democratic party. An array of Democrats (e.g., John Kerry, Hillary Clinton, Joe Biden) all supported a war based on lies, which helped transform the Middle East into the wildly unstable, blazing inferno that it is to this today.

These days, ISIS uses parts of Iraq as a playground for its terrorist activities, and Iran has influence in Iraq like it never did before. Then, there is Libya, the hallmark of Clinton’s reign as Secretary of State. Libya is currently a disaster as well, with ISIS and other foreign actors having their way with it.

No doubt the infamous Military Industrial Complex has a huge role to play in these excursions. There is the arms industry’s ever-present influence, of course, but there are also other Machiavellian factors supporting intervention that imply a power elite far more cunning and dangerous than we ever imagined.

For example, it has been alleged that Libya was fought over its threat to use currency other than the petrodollar. Maybe these wars were launched in good faith, and not just for the gain of the elite, but then it’s always profitable for some, as there’s the ever-present incentive for profiteers to lobby Congress and sway them toward intervention more often than not. Democrats just so happen to be as influenced by elite interests as Republicans.

These wars do not bode well for the fate of our empire, though. They have not only destabilized an entire region, but may even be catastrophic for our financial health. War is massively profitable, of course, but often at great expense, especially with defense spending perpetually skyrocketing , abuse following, and the necessary crowding out of spending on other projects (roads, infrastructure, drug research, etc.).

All of this is particularly galling considering the waste, the Afghanistan Papers, and the semi-recent news that about 20-something trillion bucks went missing from the Pentagon ledgers over the course of a few years.

Everyone knows about the U.S.’s precarious debt situation potentially reaching crisis levels, and a large part of this is due to profligate defense spending. The money spent to finance this debt could be used for a variety of economically productive ventures, but instead it’s used for interest payments, accountants, and as de facto subsidies for an industry that has by and large not made the world a safer place.

Things may finally be changing, however, as House Democrats recently passed a defense bill that progressives can celebrate, with features that would curb Trump’s ability to wage war with Iran, while stanching the flow of arms money to Saudi Arabia (especially consequential given their war crimes in Yemen).

At long last, Democrats are checking the power of the executive to wage war, and it only took a neo-fascist megalomaniac being elected to president to make this happen. Some would argue that the Democrats were on this trajectory during the Obama era, but then there was Libya, and the drone strikes of Americans, etc.

What we learned about Democrats during his administration was that when they were in charge, they were only too happy to use the vast array of tools at their disposal (drones, Navy Seals). Props for Syria, yes, but when Libya resembles the Seventh Circle of Hell, it’s tough to give the guy credit; the learning curve for achieving shouldn’t be destroying a country.

The current Democratic candidates, however, have diverged even from the more sanitized bellicosity of the Obama era, with all of them, to varying degrees, promoting less foreign interventionism. All have expressed a distaste for the muddle that is Afghanistan, and even more interest in shaking off the evil taint of a Saudi handshake.

It is heartening to hear so many candidates for the top position realize our foreign policy follies. Heartening is one thing, however, and radically altering traditional foreign policy while curbing the influence of the arms industry is another.

The next president will not have the time to take on such levers of influence, but they can end their generation of complicity by setting the groundwork for a more just, less wasteful foreign policy.