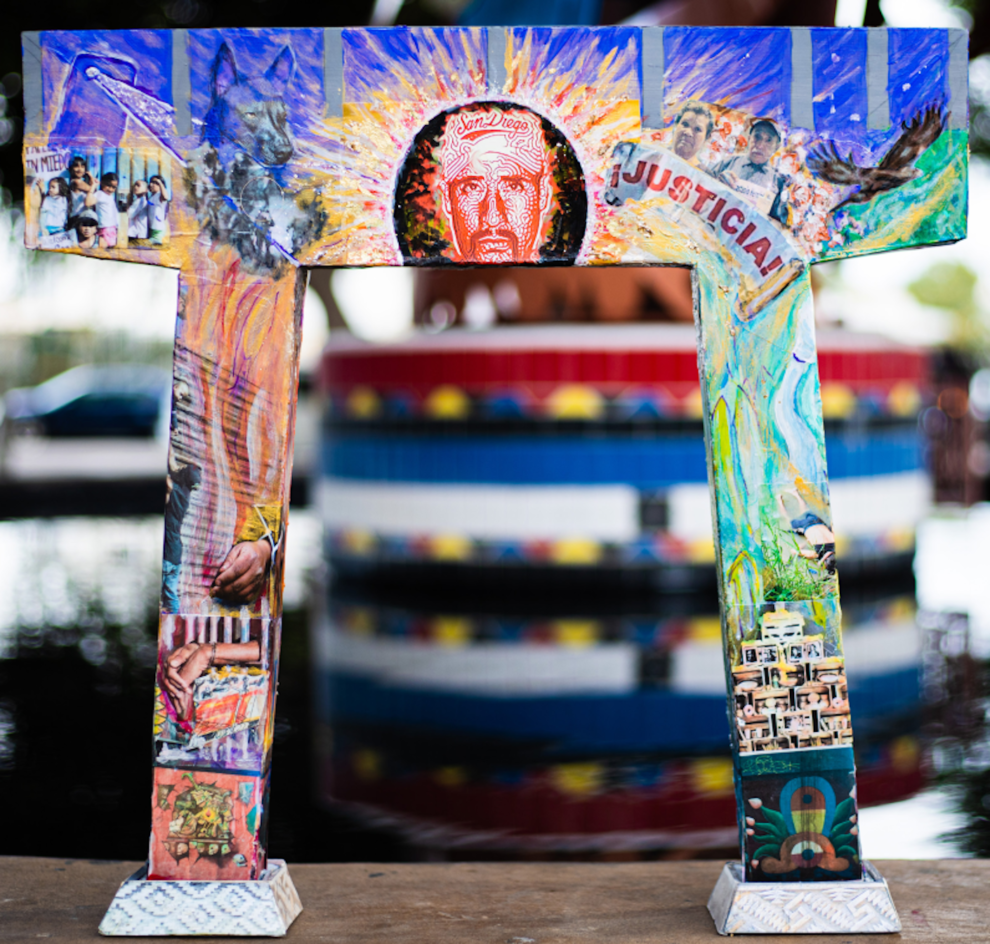 In May of 2010, Anastasio Hernández Rojas was beaten to death by Customs and Border Protection agents at a detainee exit gate at the old San Ysidro border complex, just steps away from the U.S.-Mexico boundary line.

Today, a team of artists and volunteers are washing, treating, and priming the surface on which a mural in remembrance of Hernández Rojas and others killed by border agents will be painted on at San Diego’s Chicano Park, a National Historic Landmark and home to the world’s largest collection of outdoor murals.

Chicano muralist and professor Victor Ochoa is directing work on the large-scale painting. He has worked to commemorate the history and social struggles of Chicanos, immigrants, and many others at the site since its first murals went up in the 1970s.

In Ochoa’s vision, a collage of real-life imagery and symbols will tell the story of Hernández Rojas’ final moments and calls for justice. He points to a scale model of the piece which details the proposed project.

On the front side of the design, a portrait of Hernández Rojas sits inside an eclipse, marking his passing into the dark. A xoloitzcuintle dog — a guide for spirits in Mexica lore — overlooks the scene of the killing. Opposite to this, Anastasio’s parents march for justice while a golden eagle soars into the sky.

On the back side, Maria Puga, Anastasio’s widow, holds her children. A monarch butterfly flies across a field of corn. Children who have perished in immigration custody are surrounded by cempasuchil flowers. The mother god Coatlicue ushers their spirits safely into Mictlan, the afterlife.

Jakelin Caal Maquin, a nine-year-old Guatemalan girl who was the first child death of the current refugee detention crisis at the border, and Claudia Patricia Gomez Martinez, who was shot in the head by a CBP agent in Texas, will also be depicted in the mural.

Ochoa believes honoring the deaths of Hernández Rojas and many others at the border is a step toward ending abuses of power.

“Anastasio’s death was very painful for our people and the community trusts artists on these issues because the expressions are clear to our people. When we say ‘no more’ we mean it,” he said.

Anastasio Hernández Rojas was an undocumented worker born in the state of San Luis Potosi, Mexico. During his time in San Diego, he worked a variety of construction-related jobs.

On the night of May 28 2010, a group of immigration officers beat Hernández Rojas and shocked him with tasers while he was handcuffed and on the ground. In two videos which were widely circulated at the time, Hernández Rojas can be seen surrounded by the officers, and heard yelling for mercy. The assault left the 42 year old brain dead at the scene and died shortly after at a nearby hospital in Chula Vista, California.

An investigation was undertaken by the U.S. Department of Justice into the killing in 2015. The Department determined the officers would not be charged with any criminal offenses, as malicious intent could not be determined with the considered evidence.

“After a careful and thorough review, experienced federal prosecutors determined that there is insufficient evidence to support a criminal prosecution,” a report on the Department’s investigation stated.

Although the estate of Hernández Rojas won a settlement for $1 million in 2017, no disciplinary or criminal action was ever successfully taken against the officers involved.

Despite the lack of punitive action, the mural represents a spiritual victory for some.

Muralist Mario Chacon has been involved in preparing the mural’s surface and sketching guide marks. He sees the piece as both a way of uplifting the stories of immigrants and as a reminder of  how much more work has to be done to reach a more just society.

“One of the functions of a mural is to make a statement permanent so that the community can always see it and understand its significance, or at least ask what it means,” Chacon stated.

In recent years, other immigration-related pieces have gone up at Chicano Park. A 2016 mural by Salvador Barajas, titled “No Border Wall”, displays an allegory of Mexicans being pushed out of their home country due to bad politics and lack of justice, only to be abused by American authorities at the border. Another recent piece by Barajas depicts Our Lady of Guadalupe leaving jugs of water in the desert for traveling migrants.

Older murals with immigration-related themes include a mural by Michael Schnorr telling the story of an undocumented worker and another piece by the Border Art Workshop remembering the lives of migrants lost due to increased enforcement during Operation Gatekeeper in the 1990s.

Ochoa hopes the upcoming mural will help add to the message of solidarity with immigrants found at the park and help in ending the pattern of violence at the hands of border agencies.

“Art has always been a tool to combat issues in a sincere way.,” Ochoa remarked. “I have done this for 50 years and the issues we speak out against through art always come back after some time, and they still hurt.”