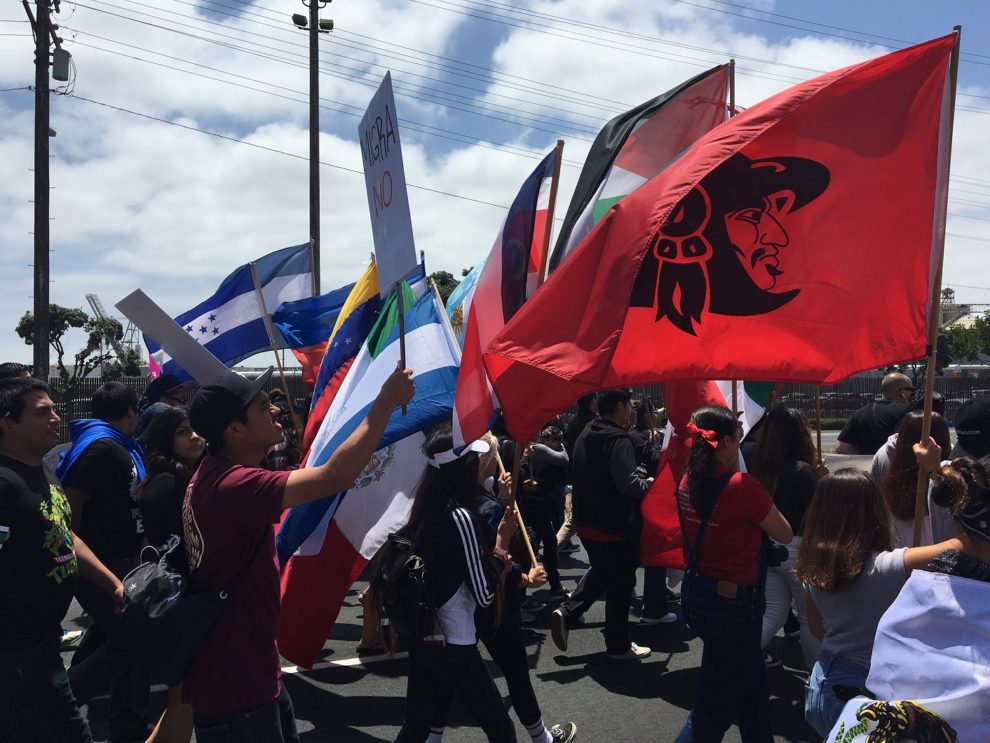 Roberto Camacho
The organization was founded by an assortment of Chicano activists almost 40 years ago.

San Diego’s historic neighborhood of Barrio Logan is home to an assortment of organizations that serve the unique needs of the community. However, few are as integrally bonded to the community and its historic struggle as Unión del Barrio (UdB).

For forty years, UdB has been at the forefront, leading the charge of resistance against border patrol and police violence in Barrio Logan and beyond. UdB has led struggles to defend the rights of workers, prisoners, women, youth, and launched numerous independent electoral campaigns in neighborhoods all across California.

UdB can trace its roots directly to the Chicano Movement of the 1960s and 1970s. Going into the 1980s, many prominent civil rights and countercultural movements of the 60s and 70s began to lose momentum. Worn down by both foreign/domestic policy turmoil and government repression through COINTELPRO, the idealistic dreams of these movements were eroded and replaced by a new wave of conservatism in social programs, economic policy, and political life.

The Chicano Movement was no exception, and by the start of the Reagan era, the movement had begun to wind down.

Harry Simón Salazar, an educator and member of the Central Committee, the national leadership of UdB, detailed the first years of the org’s existence. “By 1981, a lot of the movimento organizations had declined, and part of the process to push back against that was when UdB was founded,” he said.

He also said many veteran activists and organizers recognized the lack of a politically militant organizations to serve the needs of the barrio.

“UdB was originally founded by members that had participated in a whole range of different activities and organizations. It was really to prioritize a multi-issue, Barrio-based organization that would be able to do multiple types of community work at the same time and pick up the best qualities of the Chicano movement of the 60s and 70s, while also analyzing its mistakes and overcoming its limitations.”

UdB was officially founded on August 29, 1981 with the org’s first meeting held at the home of Ernesto Bustillos in Barrio Logan, San Diego. The original founding members of UdB came from a rich tapestry organizing and activism, with members having backgrounds in Movimiento Estudiantil Chicano de Aztlán (MEChA), the United Farm Workers (UFW), the Brown Berets, La Raza Unida Party, and the Chicano Park Steering Committee.

While its membership was composed of a myriad of different individuals, all were unified with the goal of prioritizing the interest and self-defense of the barrio’s working-class community and ultimately building a “people’s organization capable of defending the democratic rights and class interests of la Raza.”

Since then, UdB has founded chapters outside of San Diego, in Los Angeles, Sacramento, and even New York City.

Salazar’s involvement with UdB began thirty years ago, after becoming a member in 1992. He had previously joined the Brown Berets de Aztlán, San Diego’s Brown Beret chapter in the early 90s. Salazar, who was enrolled at UCSD at the time, was also a member of the Raza Rights Coalition and editor for a campus newspaper called Voz Fronteriza.

Slowly but surely, he built up his political education. But, it was Salazar’s abilities as a journalist that caught the eye of UdB, and he eventually moved from the Brown Berets to become a full member of UdB.

Today, Salazar co-coordinates UdB’s Saturday school program Escuela Aztlán. The program is an independent Saturday school organized by educators and youth organizers of UdB to help develop cultural and political consciousness among young people in the barrio, and help build the org’s long-term vision of an independent “Raza liberation school.”

UdB also organizes a political education/advocacy project known as the Chicano Mexicano Prison Project. A program that raises community consciousness inside and outside of prisons about ways that the U.S. prison system systematically targets Chicanos through intimidation, incarceration, and family separation.

UdB’s work is by no means limited to an intellectual capacity, nor to the confines of lectures and the classroom. For years it has organized volunteer community patrols that track and warn of Border Patrol and ICE immigration raids, thwarting multiple mass arrests and deportations in the region.

“In the current period, our most consistent and noteworthy work has been the community patrols,” Salazar said. “We’ve received statewide and national attention for the fact that we’re organized to both pursue and push back against ICE raids and migra raids in the barrio.”

Over the past several years, the direct actions of self-defense by UdB in coalition with the Brown Berets de Aztlan and other community organizations have received even more attention. Especially after Chicano Park was targeted by white nationalists and right-wing extremists in 2017 and 2018. While such attacks increased following Trump’s election in 2016, Salazar explained that Trump’s hateful rhetoric and will have lasting residual after-effects long after he’s left office.

“Trump could disappear tomorrow, but Trumpism will continue to have its boot on our neck. There’s a whole body of people that have identified our community as the enemy of their future and they’re betting their political future on wiping us out.”

With the residual effects of Trump’s presidency bound to feed into continued hostility toward Chicano/Latino communities like Barrio Logan even with him out of office, Simón Salazar stressed UdB’s implementation is to put the organization in a principled and organized self-defense footing. “We have to prepare, develop and advance our ability to defend our barrios by any means necessary,” Salazar explained.

Salazar lamented the increasingly aggressive behavior San Diego PD has displayed not only when patrolling in Chicano Park, but against members of political orgs in the surrounding neighborhood. The anti-community role of the police is particularly hostile to Chicano Park and those who are connected to the history of the park.

“We’ve seen a noticeable increase in the aggression of San Diego PD against political activities in the neighborhood. Anybody that’s involved with any kind of progressive politics knows that this is the beating heart of the political struggle in all of San Diego county. And as long as we have this park, then our community has a voice that has power.”

Although Donald Trump’s term has effectively come to an end with the election of Joe Biden, UdB is dedicated to continuing to fight for and defend the rights and interests of the barrio’s working class. Salazar stressed that in the coming months and years pivotal battles against fascism will be fought in neighborhoods like Barrio Logan, highlighting the importance of strategy as threats to communities will continue to exist regardless of who occupies the white house.

“The frontlines of anti-fascist struggle in the United States is in our barrios. That human garbage may be voted out of the white house, but Trumpism has been unleashed. It’s a socio-cultural phenomenon operating on the level of mainstream U.S. political culture, and it won’t simply go away with Trump leaving office.”

Salazar concluded by highlighting the importance of principled, structured organizing, even as a new administration prepares to take office. “What we have to do is organize, we have to live the change that we want and if you’re not living the change that you want then you’re just reproducing the system as it is.”

Ruth Bader Ginsburg Was A Friend To Latinos
Affirmative Action: Will California Repeal Prop 209 In November?