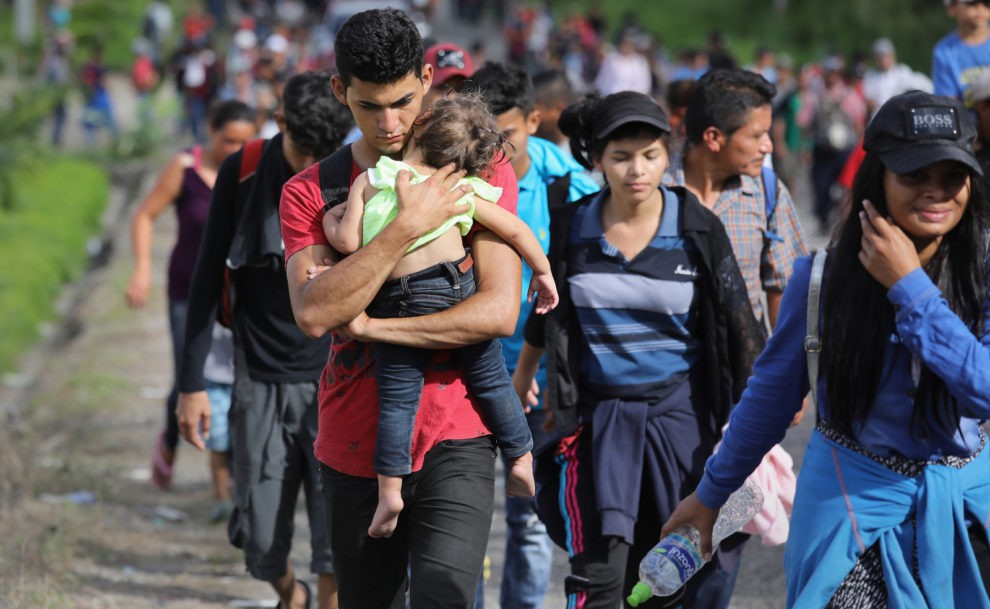 Zaydee Sanchez
Although the route to Tijuana from Central America is longer than other major ports of entries, migrants often choose the 2,5000-mile journey for safety.

Driving up a small hill on a dirt road just 24 minutes from the San Ysidro border, the turn from the main street is easy to miss. In the rainy season, the dirt road becomes a muddy river. Small cars daring to drive through can wind up missing a tire by the end of the short trek. But those who make it to the top will find refuge at a small church called Templo Embajadores de Jesús.

Such is the case for thousands of migrants. Whether you are from the north or south side of the U.S.-Mexico border, you are welcomed here with open arms.

Tijuana, Mexico has a long history of being a middle point for migrants seeking asylum in the U.S. In 2018, more than 4,700 migrants from Central America arrived at the Tijuana border. At the time, Tijuana mayor, Juan Manuel Gastelum, called it a humanitarian crisis.

“People are arriving by the hundreds every day. I don’t know what to do. I don’t know how we can house so many people.” – Pastor Gustavo

The city has long been an ideal place for migrants from Mexico and Central America. Although the route to Tijuana from Central America is longer than other major ports of entries such as the Rio Grande along the Texas border, migrants often choose the 2,5000-mile journey for safety.

The Pacific coast of Mexico is considered the less dangerous path. Cartels are less likely to kidnap and kill migrants along this passage. In contrast, the eastern side of Mexico, along the Gulf of Mexico, has seen a significant uptick in murders of migrants by cartels.

Migrants also take the longer route to Tijuana because its border crosses into California, a liberal state with sanctuary laws that appeal to migrants hoping to be let into the U.S.

California nonprofits specializing in immigration, healthcare, and general donations, are very active in providing resources for the influx of migrants. Even before crossing the border, migrants arriving in Tijuana can find at least 32 permanent shelters provided mainly by churches and nonprofits.

Camping In The Streets

These shelters are as essential as they’ve ever been today. More than 1,000 Central American migrants are living outside the Tijuana port of entry to the U.S, known as, “El Chaparral.” Families, children, and single adults are camping on the streets. A woman can be seen wearing a Biden shirt reading, “Biden, please let us in.”

As the U.S. government struggles to keep up with more than 18,000 unaccompanied children that have arrived at the southern border, Tijuana sanctuaries are packed to the brim, keeping people fed and sheltered.

It’s a warm, March afternoon. Pastor Gustavo of Templo Embajadores de Jesús stands at the entrance of his church, exasperated. The church has received over 100 migrants in the past 2 days.

“People are arriving by the hundreds every day. I don’t know what to do. I don’t know how we can house so many people,” he says as he surveys the landscape surrounding the church. Pastor Gustavo and his wife have a long history of providing shelter to migrants from all parts of the world. Their church, Templo Embajadores de Jesús, became a safe haven for Haitians in 2016, as Hurricane Mathew left thousands of Haitians displaced.

Today, as you open the doors into the main hall of the church, it’s made up of mostly Central American migrants and the large number of makeshift beds they occupy. Children run around, playing, while their families await news, any news.

Everyone is wearing masks. Some surround a TV on the right side of the church to watch the soccer game, a great reprieve amid the uncertainty.

A door opens in the distance, allowing light. In come men carrying bunk beds, placing them as close as possible to each other to save space. “I’m expected to have an additional one-hundred people today,” says Pastor Gustavo. “We’re trying to prepare.” He shakes his head at the thought.

Outside the church, two people stand at the entrance of the church securing all who arrive and go. Beyond them, women are washing clothes in the fields, hanging their laundry to dry. Small mountains surround the area. At the top of one mountain, you can look out to the north and catch a glimpse of the new shelter recently built for the Haitian community.

As time passes, a white Mexican government van slowly approaches the church. About 10 people, mothers, and their children arrive. Many look weary and distraught, clutching their little ones sleeping on their shoulders. A church helper warmly welcomes and assists them. Guiding them to their bunk beds and getting them acclimated to what will likely be a long stay.

A church helper comments, “They arrive here shaken, not knowing what to do. Some take buses back to their countries but are afraid to be smuggled on their way back by the cartel. I’ve never seen so many children. You have 2-year-olds, 3 years old here.”

The day goes and more white buses make their way up to the church. These families, mainly deportees, are being sent back to Mexico under Title 42, a law used by the previous U.S. administration to expel recent immigrants due to the presence of the COVID-19 infections sweeping the country.

A migrant mother of two exiting one of the buses summarizes her journey: “We all come on the same bus. I crossed over on the Texas side, and before I knew it, I was being driven to San Diego. When I opened my eyes I was in Tijuana and being taken to this church. For many of us, we’re taken in one way and thrown out another way.”

Charles Bennett, a writer based in Los Angeles, also contributed to this column. His work focuses on the human condition, sports, and film.

Zaydee Sanchez is a Mexican-American independent documentary photographer, storyteller, and visual journalist. She is a member of the National Association for Hispanic Journalists.

Is ICE Deporting Children With COVID-19?