Home » The Grinch That Robbed A Nation Of Its Values 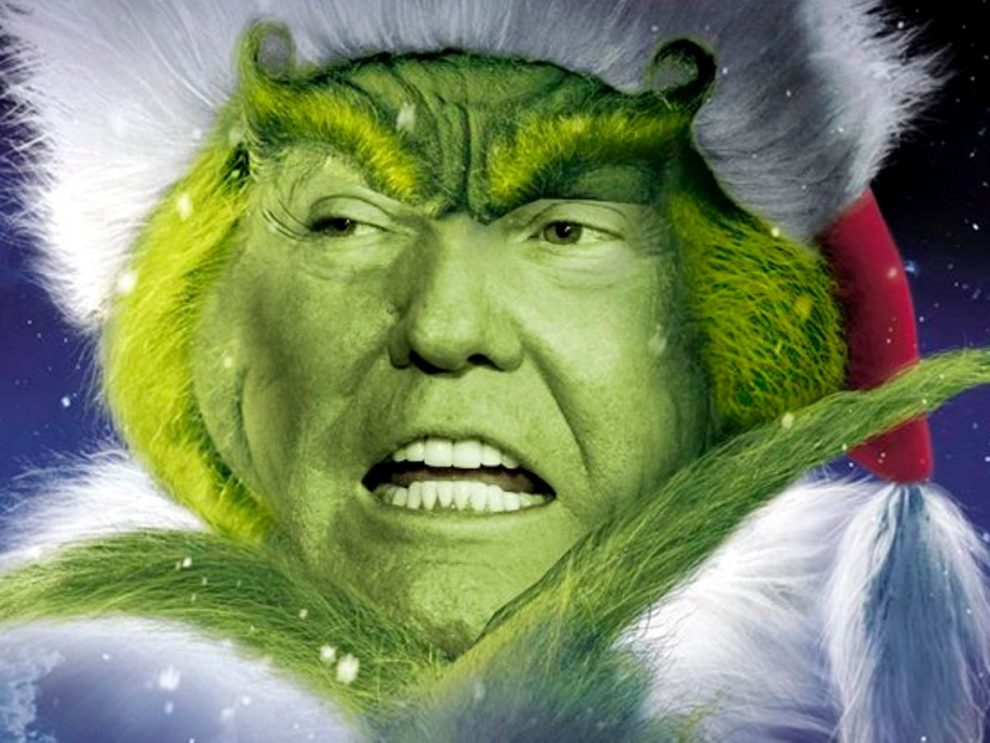 Brandon Loran Maxwell @brandonlmaxwell
American values are at risk. It's on Americans to save them.

Like a bull in a china shop, Trump has not only alienated millions with his rhetorical brimstone and bombast, but hijacked an entire political party that once promoted limited government, setting the stage for a fiscally disastrous and alarmingly intrusive federal government.

Yet as convenient as it might be to blame the voters who unleashed the bull to begin with, the fact remains Trump is merely the byproduct of precedent set before him, and an archaic conservative ideology that has adapted to modern times in all the wrong places.

To be sure, Americans have often looked to and expected strength from their elected leaders. And throughout history, such strength has often defined effective leadership.

But strength has taken on a new meaning under Trump. In fact, Trump not only believes strength derives from unapologetic exhibits of contention and division, but racial and cultural division.

And that’s just the first problem.

More than anything, “strength” under Trump is a political and strategic mask used to circumvent America’s values. It is falsehood pageanting as truth. It is insecurity camouflaged as confidence. It is incivility veiled as political incorrectness. Yet despite how easily Trump’s tough guy rhetoric crumbles under scrutiny, millions of Americans continue to fall for his bravado.

The outcome has been predictable. Since Trump’s election, the nation is more divided than ever. Yet rather than de-escalate rising tensions, the Trump administration has instead repeatedly chosen to push a false narrative on strength.

When asked about Trump’s combative Tweets, for example, former Press Secretary Sarah Sanders responded, saying Americans “didn’t elect somebody to be weak, they elected someone to be strong”—implying strength somehow comes from one’s ability to Tweet insults.

Trump, of course, has had plenty of opportunities to demonstrate these traits. But throughput the course of his presidency, he has shown no interest in rising to the occasion or unifying the nation.

This became clear following Hurricane Irma, in which he belittled Puerto Rico. We saw it following the attacks in Niger, in which he attempted to discredit the grieving widow of Army Sgt. La David Johnson. And we saw it again as he lashed out at the Mueller investigation.

One would think these incidences would be enough to concern Republicans. Yet since Trump bulldozed his way into the highest office in the land, Republicans have been nowhere to be found. Rather than speak out at the risk of criticism within their own party, self-proclaimed constitutionalists like Ted Cruz—once a vocal critic of Trump—have instead laid down like dogs out of self-preservation and political expediency.

And then there is the NFL. Following protests in which players kneeled during the national anthem, Trump attempted to frame strength as subordination. Worse, as homogeneity. In Trump’s narrow world view, strength has no relationship to diversity. Strength can’t come from discourse or dissent. Strength must come from conformity. And anyone who doesn’t conform is anti-American, anti-military, or quite simply a “son of a bitch.”

But again, Trump is wrong. The true strength of the United States has, and always will, derive from its differences. Its colors. Its cultures. The freedom to speak out. And if anyone should know and respect this, it’s Trump. It was the First Amendment, after all, that allowed Trump to rise to the highest office in the land to begin with through criticisms of the previous administration and promises to “make America great again.”

But America is not great again. And Trump is more than just a flawed president. Donald Trump is a misguided president. He is a president who, unlike presidents before him, explicitly depends on fear, division, and a false sense of strength to advance his agenda (Trump’s “wall” anyone?)

To make matters worse, Trump has repeatedly found himself at the center of scandals involving Russia and Ukraine.

At what point is enough, enough?

American values are at risk. As a result, Democrats and Republicans alike have a historic obligation to put political differences aside and unite in opposition to the man threatening them.

Anything less is a failure on our own part.

A version of this column by Brandon also appeared elsewhere.