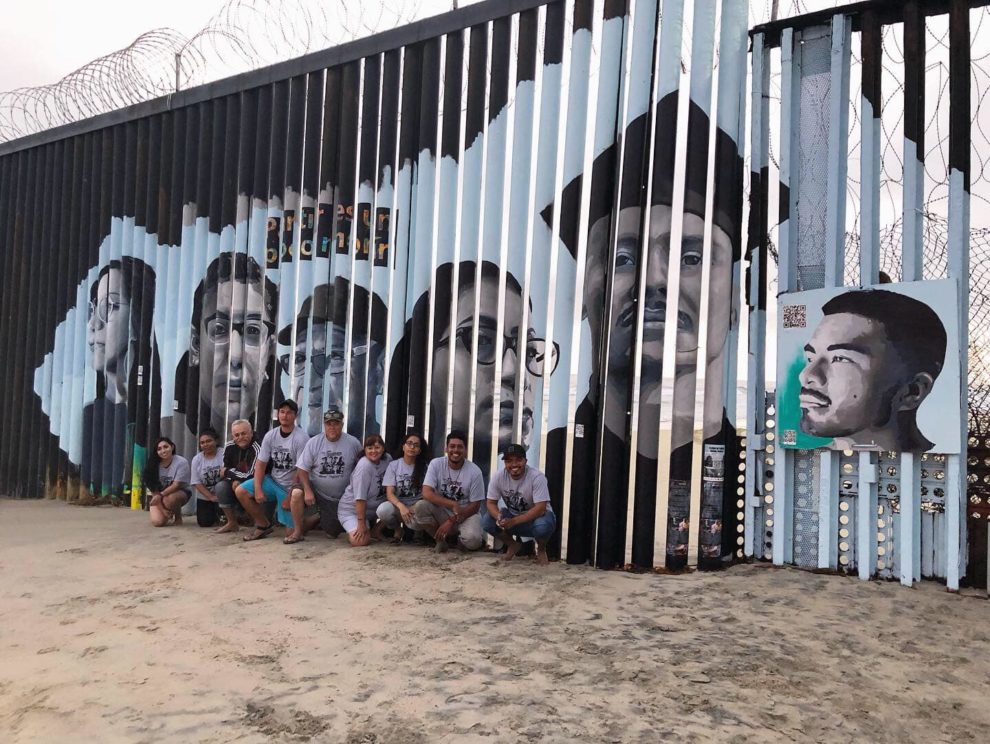 At the western end of Playas de Tijuana, where the land boundary between Mexico and the United States meets the Pacific Ocean, one can find portraits of individuals who arrived in the United States in their early youth forming a mural on the edge of the border wall.

The faces on this mural include those of Karla Estrada, an activist whose family was torn apart by deportations, and Andrew De Leon, a 73-year-old Army veteran who was returned to Mexico after a misdemeanor. QR codes attached to each portrait link to short films telling the stories of those depicted.

These are just two of the narratives which comprise the Playas de Tijuana mural project, created and developed by Lizbeth de la Cruz Santana, a Ph.D candidate at the University of California, Davis as part of her dissertation. The installation seeks to humanize repatriation cases and probe into childhood arrival cases outside of an academic environment.

Work on the first phase of the mural was completed in September of last year with the help of 15 volunteers under the direction of De La Cruz Santana and artist Mauro Carrera. Many of the people on the mural painted their own faces on polyester panels, which were pasted together on the border wall to create the display.

De La Cruz Santana got the idea for an installation back in 2016 during an academic trip to Tijuana, just one day after the November 2016 Presidential Election. That day, she was captivated by how alive with music, art, and activism the Mexican side of the border wall was compared to the American side, which only had a couple of Border Patrol agents in vehicles.

“I saw all the art that was there at the time and I was just taken away by everything — the movement, the deported veterans’ upside down flag to show distress, the messages people left for immigrants,” she said. “It’s a place that keeps transforming.”

The final quarter of Playas de Tijuana has a long history of displays of solidarity and political commentary, mostly critical of immigration policy enforced by the United States. At the binational Friendship Park, cut in half by the border wall, various groups organize regular demonstrations and religious ceremonies. In 2016, artist Maria Teresa Fernandez painted the wall sky blue, as to mimic the wall’s erasure.

The site also holds personal significance to De La Cruz Santana, as her father crossed into the United States through this same stretch of beach in the 1980s.

At the time of her first visit, she didn’t know exactly what form her project would take, but her goal was to change the way people see and interact with the border.

“I wanted to use this space and take it back to send a really strong message to not just the U.S., but Mexico as well,” she said.

De La Cruz Santana had pondered the question of childhood arrivals while working with youth protected from deportation by the enactment of the Obama-era Deferred Action For Childhood Arrivals (DACA) program, which offers protections to youth who arrived to the United States before very specific age and date limits.

But after some research in Tijuana, she realized DACA beneficiaries are just a small portion of all people who arrived in the United States as children.

“We always consider one group over another, so for this to exist that means we are always creating an “other” who is more deportable,” said De La Cruz Santana. “For me, it was important to highlight the stories of other childhood arrivals who were already deported to create more awareness for others.”

While all individuals on the mural arrived in the United States in their childhood, through the agency of their parents or guardians, their stories all embody different sides of the issue.

Monserrat Godoy was repatriated to Mexico, separating her from her daughters. In her QR link, she reads from a storybook she wrote to help her young daughters make sense of the situation.  In his respective feature, DACA beneficiary Jairo Lozano shares how he is using his experiences to uplift youth in vulnerable conditions through music in Central California.

As one of the researchers in UC Davis’ Humanizing Deportation project, which to date has collected testimony from over 300 people, De La Cruz Santana’s work had already put her in direct contact with many of the people shown on the piece.

Curiosity about the individuals depicted on the mural are not uncommon because of the highly visible and public nature of the piece.

“People want to know why their faces are here,” De La Cruz Santana stated. “The mural is a great conversation starter about subjects like migration, deportations, and the paths people have taken.”

As part of its digital component, the Playas de Tijuana Mural Project and all its materials can be consulted online. More testimonies are also available through the Humanizing Deportation YouTube channel.