Home » Latinos Face Racism from Everywhere, Including Themselves 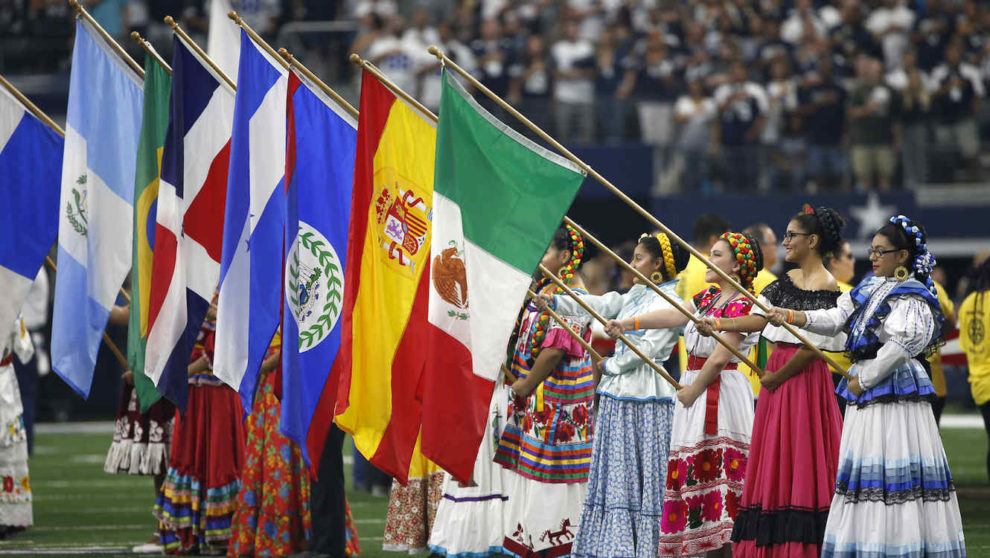 Turn on the TV or social media, and chances are you’ll see news of yet another attack against minorities. The recent violence against African Americans, Jews, Arabs, Indians, and Latinos has been disturbing, especially since the president may have emboldened the perpetrators with his wildly xenophobic, racist philippics (his previous statements about laziness being an inherent trait in African Americans are the definition of racism).

That the United States is still plagued by racist violence is sickening, and particularly troubling for Latinos. Beyond African Americans, Latinos in the U.S. have the longest and most serious experiences with racism, a racism that still divides the community to this day.

If you’re Latino, you’ve either faced racism explicitly, or your parents have. Both of my parents have experienced such instances, whether it was teachers telling them to not speak Spanish in school, or different neighbors calling them wetbacks. This was particularly ironic, since my family never immigrated to the United States.

There were these instances, and then instances of Croatians in my hometown complaining about Mexicans making it “dirty,” as if Mexicans were newcomers and the Croatians weren’t recent immigrants themselves.

It gets worse if you’re an immigrant or come from an immigrant family, especially since there are often language barriers and sharper cultural differences that make your family appear to be an even more threatening “other.” Still, for the Latinos who have been in this country, it’s frustrating to be considered an “other” by everyone, especially Europeans whose families are relatively new to the country.

It would seem like an achievable goal to unite Latinos in the fight against racism, but this can be quite difficult when considering that racism has often divided Latinos. For Latinos, particularly Mexican Americans, racism has created unique cultural consequences.

This oppression resulted in an internalized racism that’s still present in these people’s ancestors today.

New Mexico again provides a tragic example of this. People there, my relatives included, refer to themselves as “Spanish,” which actual Spaniards find to be hilarious. The consequences of such racism are an obsession with those who have lighter features, and an air of superiority over Mexicans.

To be sure, there are regional differences between New Mexicans, Arizonans, Texans, and Mexicans, but these differences can’t be attributed to one area being filled with pure Spaniards. Many of my family members have this obsession with purity (as though Spaniards are pure), an obsession no doubt a response to Anglo racism.

This racism has had disturbing effects on Latinos. I remember being told as a young child about my dad’s uncle (but really an older cousin) who had served in the Marines in World War II. He considered himself pure Spanish and hated Mexicans, going so far as to beat up Zoot Suiters in Los Angeles, taking special glee to beat up those unfortunate enough to share his last name.

It’s a similar situation with Dominicans and Puerto Ricans on the East Coast who deny their African heritage. Not to mention the divide between immigrant and non-immigrant communities (even Cesar Chavez called undocumented immigrants “wetbacks”).

Today, it’s not uncommon to see pro-Trump Latinos excoriating immigrants and even refugees for trying to make a better life for themselves in this country.

Thus, racism serves to create an enduring sense of otherness in Latinos, an otherness that leaves us with a fundamental insecurity in our Americanness, and potentially even a fear that the foundations we’ve built in this country will be taken away.

For more than a century, Latinos have largely worked hard and kept their heads down in this country, rising to the occasion whenever they were called to duty, and often volunteering in disproportionate numbers to serve in the military during major wars.

We still feel we have to prove ourselves, and in this current xenophobic climate, some of us will wrap ourselves in the flag and go after our more recent-arriving brothers and sisters.

In some sense, all of this is inevitable. Latinos are not, and never have been, a cohesive group. Expecting Puerto Ricans, Venezuelans, Cubans, and Mexicans to have the same interests has never been a realistic goal. Even expecting Mexican Americans to be cohesive isn’t always realistic, as their history in the U.S. is so diverse and fraught.

What we should understand, though, is that we’re facing an unprecedented threat by xenophobic forces that are using tools of hate to advance elite interests and divide the middle and lower classes, of which most Latinos are a part.

We can use our common cultural threads to forge strong class ties and create a movement to challenge these forces that goes beyond the college campus.