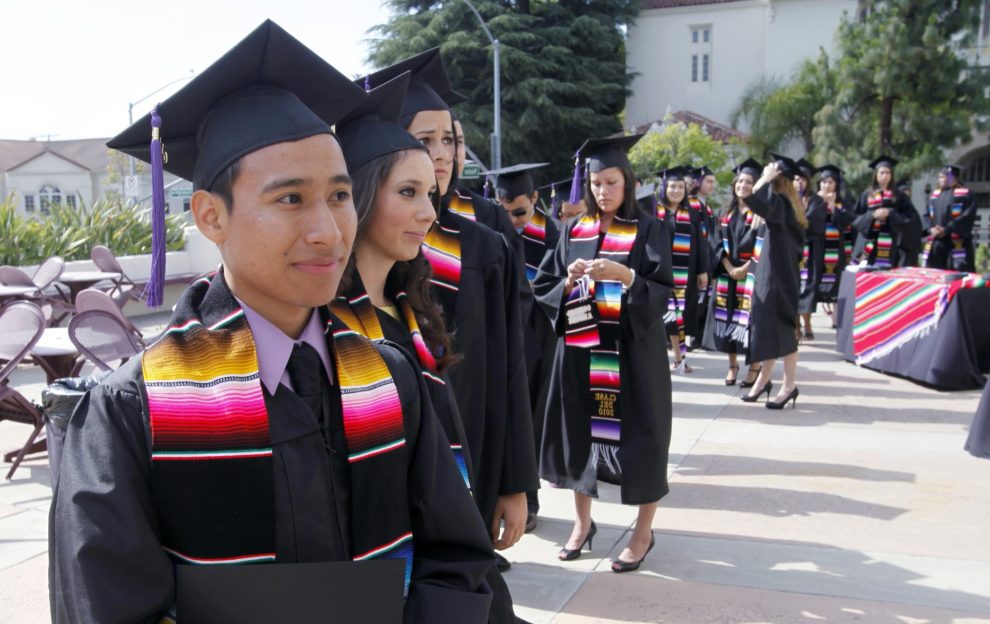 Claudia Araiza
70% more Latinos earned degrees in the past decade than any previous decade.

Last month, the National Center for Education Statistics (NCES) released a comprehensive data analysis on the state of education across all educational levels, and it appears enrollment of Latino students at college campuses has increased.

But while Latino enrollment has increased overall, the Latino student population as a whole still lags behind the enrollment rate of other groups. The same pattern exists with the number of college degrees awarded to Latino students.

During the 2017-2018 cycle, there was around 26 million students enrolled in postsecondary institutions in the U.S., including degree and technical/non-degree programs.

While 18-24 year olds enrolled in degree-granting postsecondary institutions only made up 40 percent of the student population in 2017, the majority of the students were non-traditional (above 25 years of age).

Also, according to the NCES data, the year 2010 experienced the largest number of enrolled students, a number which is estimated to be surpassed later in 2028.

Another fact to consider is that from 2007 to 2017, there was only a slight increase of enrolled students in such educational institutions. Many factors affected the slow growth of enrollment numbers but the financial crisis from 2007-2008 was mainly to blame.

Enrollment numbers for the Latino population between the ages 18-24 increased from 27% in 2007 to 36% in 2017, but was still behind in 2017 compared to the enrollment rate for Caucasians.

Also according to the NCES data, from 1976 to 2017, the Latino presence in degree-granting postsecondary institutions increased from 4% to 19% overall, whereas during the same period, the percentage of Caucasian students dropped from 84% to 56%.

The largest increase was achieved by Latinos as the number of college degrees awarded to the U.S. Latino population increased by 70% during the same 10-year cycle. This is saying that 70% more Latino students in college managed to earn a college degree from 2005 to 2017. This is in stark comparison with the rise of degrees awarded to other groups (Caucasians increased by 19% during that same 10-year cycle, for example).

That is only a small 2 percentage points of an increase during the latest 10-year cycle considering that the Latino population is currently the second largest ethnic minority in the U.S.

Also, according to the data from NCES, only 15% of the Latino population (over the age of 25 years) possessed a bachelor’s degree or higher in 2017, which is a lower rate when compared to the entire U.S. population (38% for Non-Latino, Caucasian, 23% for African American,  56% for Asian/Pacific Islander, and 18% for Native American).

In California, it was estimated that 34% of the population over the age of 25 had a bachelor’s degree or higher in 2017, but only 13% of Latinos population had the same degree.

And in Texas, 30% of the population over the age of 25 had a bachelor’s degree or higher in 2017, but only 14% of the Latino population possessed the equivalent degree.

The Latino population should be proud and excited that a greater number of Latinos are earning a college degree and the increase has been climbing rapidly over the last 10 years but there is plenty of room for improvement.

What is a “Hispanic-Serving Institution?”
How Latinos Can Lessen Debt When In College