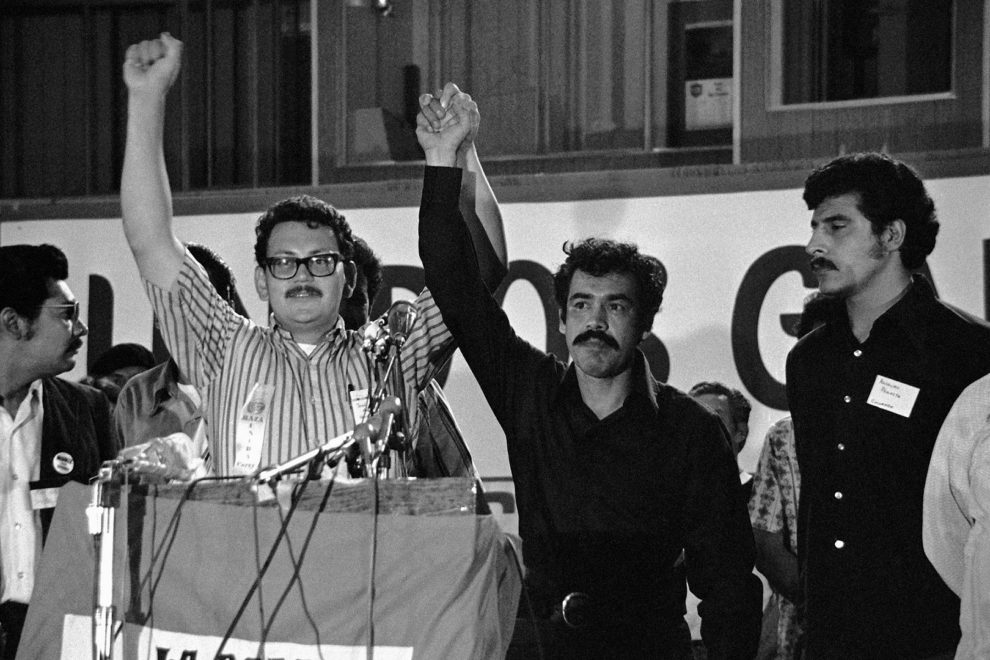 Angelica Pena
Chicanos have a long history of mobilizing on behalf of their rights and liberties.

From the 1836 Texas revolt to now, Mexicans and Mexican Americans have been shuffled across both sides of the border, either by force or by choice. Because of this history, an assortment of border identities has formed, the most notable being Chicano.

In a country that has often made them feel like outsiders, second class citizens, and an expendable labor force, Chicanos have a long history of mobilizing on behalf of rights and liberties.

Here is a brief account of five significant Chicano movements in the U.S. and the methods they used to secure a political voice.

Following the path of a former labor union called the United Cannery, Agricultural, Packing, and Allied Workers of America (UCAPAWA) who staged several strikes during the 1930s-40s, the United Farm Workers (UFW) was built from a unification of two workers’ rights organizations, the Agricultural Workers Organizing Committee (AWOC) and the National Farm Worker’s Association (NFWAI).

The UFW was formed by the efforts of Filipino, Black, and Mexican activists who advocated for better pay and safer working conditions for all marginalized minority laborers. This remarkable alliance, led by Dolores Huerta, Cesar Chavez, Larry Itliong and Gilbert Padilla inspired over 1,000 farm worker strikes, boycotts, and protests across the United States.

In fact, due to these methods, Chavez was able to reverse the Right to Work Law in California which would have prohibited farm worker labor organizing and permitted employers to fire their workers without reason.

As covered in a previous article of mine, poor learning environments and assimilation tactics have plagued Latino American youth for generations now. Similar to the Farm Workers’ Movement, Chicanos and Latino youths, with the support of the Brown Berets, staged various walkouts or blowouts throughout the 1960s and 1970s to combat their poor public-school conditions.

The 2017 ruling is due to the year’s long effort of Arizona students and teachers. Ironically, since the ban’s enactment, ethnic studies programs have gained greater popularity across the U.S.

Protecting both students and undocumented peoples, the federal Plyler v. Doe case of 1982 struck down a statute that attempted to deny funding for the education of undocumented children. By effect of the four families that sued the Tyler Independent School District for this practice, most k-12 public schools are not even permitted to inquire about the status of their students to this day.

Apart from the Plyer v. Doe case, many other rulings have secured protections for undocumented individuals. In one of the most notable cases, Graham v. Richardson (1971), the jury sided with the resident immigrant of Arizona, Carmen Richardson, who was denied welfare benefits because of her status.

The unanimous ruling ensured that non-citizens could receive welfare benefits, given they pay taxes as well.

Beyond the court, public demonstration and protest have become noteworthy methods for immigrant protection advocacy. As José Ángel Gutiérrez explains in a 2011 article that details Chicanos Paths to Power, “the largest and most widespread public demonstrations in this nation of immigrants have been held by Chicano immigrants and those who supported them in 1976 and 1986.”

We have seen waves of mass public demonstrations for immigration reform throughout the last few decades. In 2006, 2010, 2018, 2019, and even this year, reoccurring protests have fought for the unification of families, protection and release of undocumented children, decriminalization of immigration, and access to health benefits, driver licenses, and work permits.

More specifically, activists have sought protection of the Deferred Action for Childhood Arrivals (DACA) and pressured for the enactment of the DREAM Act. In fact, in 2010 two Latino students and one Iranian student trekked from Miami to the nation’s capital to pressure for federal ratification of the DREAM Act.

In the infamous August 29th movement in East L.A., thousands of Chicanos marched in nonviolent protest of the Vietnam war. The police riot that ensued during the protest left several injured and four dead by the hands of police.

Ultimately, journalist Ruben Salazar was a casualty among the four, and as fellow writer Brandon Loran Maxwell explained, “Salazar’s death, like the deaths of those Chicanos who died in Vietnam, would become a rallying cry for Mexican Americans.”

During the height of the Chicano movement, young Chicanos began to feel dissatisfied with the Democratic Party. Feeling disillusioned in a political arena that neglected the Chicano concerns from both corners, they formed their own political organization, La Raza Unida Party (RUP).

Before being targeted and dismantled in 1980 by Democratic Party efforts, RUP had extended to seventeen states and fielded numerous candidates, several who won their elections.

While this brief overview is in no way an exhaustive account of the Chicano Movement as a whole, it serves as an outline of the Chicano community’s journey of political advocacy, thereby, illustrating the civil power of Chicano people. Though we are, thankfully, often aided by others, the potential for national change resides in our community as well.

For many generations, the population of Latinos and Chicanos in the U.S. has rapidly increased. Though difficult to organize a pan-ethnic population under similar political ideologies, more voting power and more voices might serve as a means of stronger advocation for our community.

This year has made it clear: protest, litigation and awareness still make changes not only to the law but the culture as well. With predecessors that have experienced success in the political arena, a greater Chicano and Latino population will hopefully mean even greater progress.