Home » The Night I Got Tipsy With Mister Rogers 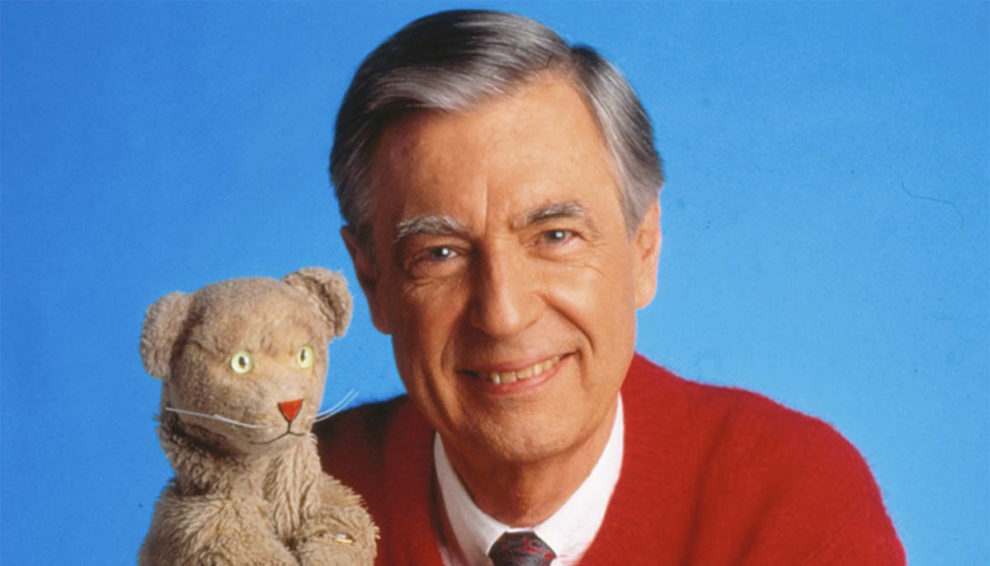 Brandon Loran Maxwell @brandonlmaxwell
Maybe Fred, like the rest of us, just wanted to get out and live a little.

His red sweater reminded me of Kurt Cobain’s now famous green sweater from MTV unplugged. Over the course of hundreds of performances, the seams had slowly begun to fray, and rumors swirled backstage it hadn’t been washed in years.

Nobody seemed to mind. In many ways, it was to be expected. But what none of us could have predicted is that this same man—renowned for his soothing demeanor and puppet wizardry—would also teach me everything I know about sex, drugs, and rock ‘n’ roll.

And that’s really where this story begins.

I first crossed paths with Fred, who the world would come to know as Mister Rogers, in 1999. It was the only time we would ever speak, but it was an experience I will never forget.

At the time I was working as a security guard in the same studio lot where Mister Rogers’ long running show happened to be produced. Fred himself had just finished up a long shift when he politely asked if I would escort him to his car.

It was a short walk. Along the way, nothing particularly struck me as out of the ordinary. If anything, I was struck by just how normal and ordinary he was. He was, after all, the most recognizable puppeteer on public television.

It was only after we reached his car, which to my surprise turned out to be a new Mustang (I figured he drove a Station Wagon or something), that everything I thought I knew about Mister Rogers forever changed.

“Would you be interested in accompanying me for a beer?” Fred calmly asked.

The question caught me by surprise. “Tonight?”

The first thing I noticed about the inside of Fred’s Mustang—which he proudly referred to as “The Bullet”—was that the upholstery had been customized with cheetah-print skin and red neon lights that lit up the floorboard. It was a far cry from the Mister Rogers I had come to expect from television. But before I built up the courage to mention anything, he flipped the visor, grabbed a flask, and guzzled a shot of whiskey.

And like that, I was no longer concerned about the upholstery.

He stomped his foot on the peddle and we sped up Hollywood Boulevard. Along the way, he sparked a Newport cigarette and dropped the tinted windows, blasting Tigres Del Norte into the breeze.

After a few miles, we stopped at a red light. “Maybe we should slow down a little,” I said. “I’m still in my security uniform.”

He glanced at me like I was joking. Then he reached for a can of Three Flowers tucked below his seat and dragged a comb through his hair with a devilish grin that would have made Steve McQueen or James Dean look like overrated B-listers (which they were).

“You live one life,” he said. “You really want to waste it whining about a little danger?”

We drove a few more miles and eventually swung into the crowded parking lot of a poorly lit dive off Santa Monica Boulevard. It’s probably not there anymore, so don’t look for it. But the first thing I remember as we stepped out of the car was a bouncer with a neck tattoo greeting Fred by the name “Rog-dog” before letting us past the front door.

The joint was smoky and teeming with drunkards. On any normal occasion, I might never have stepped foot inside. But now that I was in, I got the sense I probably shouldn’t let my guard down.

“Three shots of 151,” Mister Rogers yelled out to the bartender, who nodded his head like he expected nothing less to come from Fred’s mouth.

I pulled Fred aside. “I appreciate the gesture, but I don’t drink 151.”

He smirked. “Who said they were for you?”

After we got our drinks, we roamed to the back of the bar. I noticed a group of men hanging out by a pool table. One of them had a ponytail and black leather pants. I had never seen him before, but I sensed he was the leader by the way the others were gathered around him.

He eyeballed Fred and snickered as we passed.

The man with the ponytail glanced in the direction of the pool table. “You and me, old man. Winner gets the red sweater.”

Everybody laughed. Fred sized the man up, appearing to weigh his options. He wasn’t really considering the challenge, was he?

I grabbed Mister Rogers by the arm. “Just ignore him, Fred—it’s not worth it.”

But before I could stop him, he unbuttoned his red sweater, draped it on the back of a barstool, and picked up a pool stick. “You’re on, cowboy—last pocket,” he said.

And moments later, a high-stakes pool game was underway.

At first, the two appeared to be evenly matched. But as time went on, it became clear Fred was no amateur, comfortably and confidently knocking in one shot after the next.

A crowd gathered. At one point, I remember Fred shooting pool balls into pockets from behind his back while drunkenly humming, “It’s a beautiful day in the neighborhood,” to taunt his opponent.

The game ended shortly after. To the surprise of everyone, Fred had somehow managed to pull off the unthinkable by running circles around a professional pool hustler with leather pants and a ponytail.

He brushed off his red sweater, put it back on, and turned to the man. “Pay up.”

The man lit a cigarette. “Get lost, old man—that wasn’t the deal.”

Fred looked at me, took a deep breath, then turned back to the man with the ponytail. “Don’t make me turn you into one of my sock puppets. Because if that’s how far I need to reach to collect my money, I will.”

The man inched closer. “Are you threatening me?”

The jukebox screeched to a stop, and the bar fell silent.

Then, out of nowhere, Fred grabbed a pool stick, swung it as hard as he could, and broke it across the man’s forehead, sending him tumbling to the ground. “Ahhhhhhh!” the man shrieked.

One of the other men stepped in and threw a punch at Fred in return, but Fred ducked it just as fast, grabbing and smashing a beer bottle over the top of the second man’s head.

Blood spattered onto the pool table and the man’s knees buckled below him.

Fred turned to me and shouted, “vamanos!”

We darted out the door and jumped into “The Bullet” with security guards hot on our tail. Fred fired up the engine and we skidded off into the night, whipping up a cloud of dust in our wake.

On the drive back we didn’t speak. Not a single word. Not even when he pulled off at the drive-through of In-N-Out Burger. We simply pulled up and a worker handed him his food, as if it was nothing more than Fred’s nightly routine. I racked my mind, still trying to make sense of what I had just witnessed.

By the time we reached the studio lot, the sun was beginning to rise. I stepped out and glanced back at Fred, wondering if he had something—anything—to say. But again, he didn’t say anything. Instead he just looked at me, raised his sunglasses, and nodded at me with a grin.

Then he sped off.

Twenty years later, I’m still unable to make sense about what happened that night. Maybe Fred was tired. Maybe, after decades of being propped up as a moral beacon of American society, he had finally had enough and snapped. Maybe he was never the man we thought he was to begin with.

Or maybe Fred, like the rest of us, just wanted to get out and live a little. Can you blame him? In either case, one thing is for certain: I’ve never looked at Fred—or puppets—the same since.

Comic: Evolution Of The Edgar
10 Ways Latinos Can Survive A Trump Acquittal