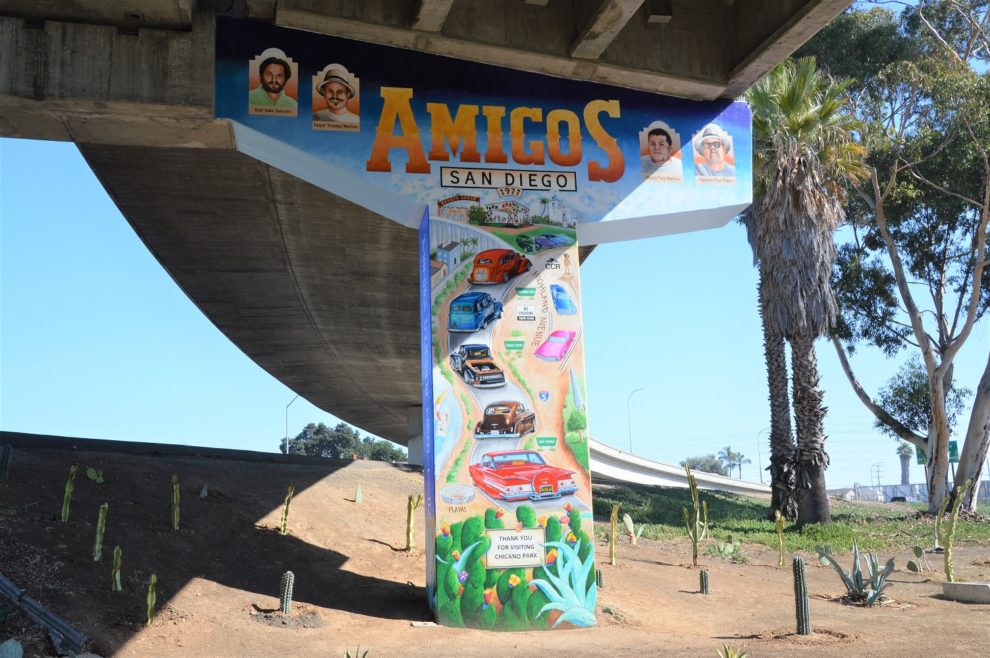 Roberto Camacho
The new Chicano Park mural is not only about celebrating art, but community, culture, and history.

On Sunday, the community of Barrio Logan in San Diego celebrated the completion of Chicano Park’s newest mural, a tribute to The Amigos Car Club honoring the pioneering lowriders that took part in the lowriding cruising movement in the San Diego region.

Chicano Park is located in the working-class community of Barrio Logan, a historically Mexican-American neighborhood Southeast of downtown San Diego. The park is significant in Chicano history, where nearly 50 years ago, barrio residents, alongside a coalition of students, community activists, Brown Berets and others from nearby neighborhoods, helped successfully liberate the land that would eventually become Chicano Park.

Ultimately the neighborhood was able to prevent the construction of a California Highway Patrol substation on the land where the City of San Diego had promised to build a park for residents of the barrio. Today the park is now designated as a National Historic Landmark and is widely regarded as a monument to Chicano resilience, perseverance, and self-determination.

Chicano Park also houses the largest collection of outdoor murals in the entire world, many which not only capture the struggles, hardships, and injustices suffered by the community, but serve as a living testament to the ingenuity, determination, and triumphs of the barrio.

The seventeenth marked the latest addition to Chicano Park’s rich tapestry of colorful murals documenting the neighborhood’s rich and vibrant history and other images from the Chicano Movement. The celebration was joyous, as dozens of Mexica dancers dressed in colorful regalia and performed ceremonies around the mural, the scent of burning sage wafting through the afternoon breeze and the sound of thunderous drumming ringing through the cathedral-like pillars of Chicano Park.

“As you may have noticed we did not include a border because we see no difference between our brothers and sisters from across the border in Tijuana and here in San Diego.”

Hundreds of people, many of them members of the Amigos Club and their own families gathered to celebrate to the public unveiling of the park’s newest mural which the car club sponsored and commissioned. Located just north of the southbound Interstate 5 on-ramp at Logan Avenue, the mural is strategically situated where dozens of lowriders process out of the park in spectacular fashion every year at the annual Chicano Park Day Celebration.

Muralist Salvador ‘Sal’ Barajas, one of the park’s original muralists worked with Amigos Car Club to help bring the club’s vision to life. Barajas, who spoke at the mural’s unveiling divulged some of the details about the intricate process and the amount of labor that went into creating the park’s latest mural.

“The mural was difficult, it took me three months to complete,” Barajas said as he addressed the crowd. “The noise was incredible, it’s difficult to describe, you just have to be there to feel the atmosphere being 25 feet away from the freeway.”

From beginning to end, from the first initial renderings and conceptual art, to the very last brush stroke, the whole job took more than a year to finally bring to completion. For nearly three months Barajas worked tirelessly on the mural, working from six-thirty to three in the afternoon six days a week perched on scaffolding as traffic on the crowed Interstate 5 whizzed by.

“It was something that needed to be done, and Amigos Car Club was very much instrumental in being what Chicano Park is about,” Barajas said, “it’s a great addition to Chicano Park”.

The Amigos Car Club which was founded in 1977, was one of several lowrider clubs that formed during the heyday of lowriding in San Diego during the 1970s. Rigoberto “Rigo” Reyes—one of the club’s founding members—also spoke at the ceremony, giving a brief overview of the history and individuals depicted on the new mural and its significance to Chicano Park.

“We have a long history here at Chicano Park, many of us founders including myself, have been involved in various Chicano organizations before we even started the car club. Our involvement here at Chicano Park is not just the past 42 years, it goes back much farther,” Reyes said as he spoke in the shape of the park’s towering overpasses.

The scene depicted in the art of Sal Barajas depicts a cruise all the way through various neighborhoods in San Diego. Beginning in Playas de Tijuana, Mexico the route snakes its way all the way from San Ysidro to Chula Vista, then to Highland Avenue in National City, which Reyes described as the Mecca of lowriding in San Diego during the 1970s.

The cruise eventually concludes in Chicano Park signified by a rendition of the park’s iconic kiosko and a gathering of Mexica dancers. Reyes also pointed to other geographic nuances depicted in the mural, most notably the absence of any border between the U.S. and Mexico.

“For us, it was very important for people to understand how we see this particular region,” Reyes said. “…As you may have noticed we did not include a border because we see no difference between our brothers and sisters from across the border in Tijuana and here in San Diego.”

The mural also pays tribute to some of the club’s oldest members, its walls adorned with portraits of the club’s founding members: Raul ‘Indio’ Guerrero, Gaspar ‘Grandpa’ Martinez, Tiburcio ‘Toby’ Martinez, and Reyes himself as well.

“The core of the Amigos Car Club’s legacy has always been its emphasis and passion for the preservation of lowrider history, culture and traditions.”

Reyes recounted stories of the club’s founding members, several of which have since passed but were instrumental in seeing the club alive during its most difficult years.

“At one time in our history, we were going through a very weak time, weak in the sense that we were kind of dying down. Particularly in the mid-80s when a lot of the pioneer lowriders started giving up, started getting married and started disappearing out of the scene,” Reyes said. “These people were all instrumental in keeping us from losing our traditional lowrider values and keeping us on track.”

The mural, however, is not only an homage to San Diego’s lowrider culture, but the opposite side of the mural also pays tribute to past members of the Chicano Park Steering Committee, stewards and caretakers of the park who have passed on that were also instrumental in the history of Amigos Car Club

At its essence, however, the mural is a celebration of history, an aspect Reyes concluded with by saying, “one side says history, culture, and tradition, that’s what Amigos Car Club stands for, that’s our mission”.

And it’s a mission Amigos Car Club has been committed to for nearly forty years. Since 1983 the car club has been at the forefront playing an active role organizing and sponsoring the annual lowrider show that takes place every year at Chicano Park Day in celebration of the park’s liberation.

Needless to say, the core of the Amigos Car Club’s legacy has always been its emphasis and passion for the preservation of lowrider history, culture and traditions, a hallmark captured eloquently in the brushes and paint strokes of the newly christened mural at Chicano Park.

“For us, it’s very important that we recognize all of these people,” Reyes said. “We wanted to give a historical perspective according to us. Not just through our car club but in general as lowriders”.