Home » How Toker Of Brownside and Eazy-E Reinvented Rap 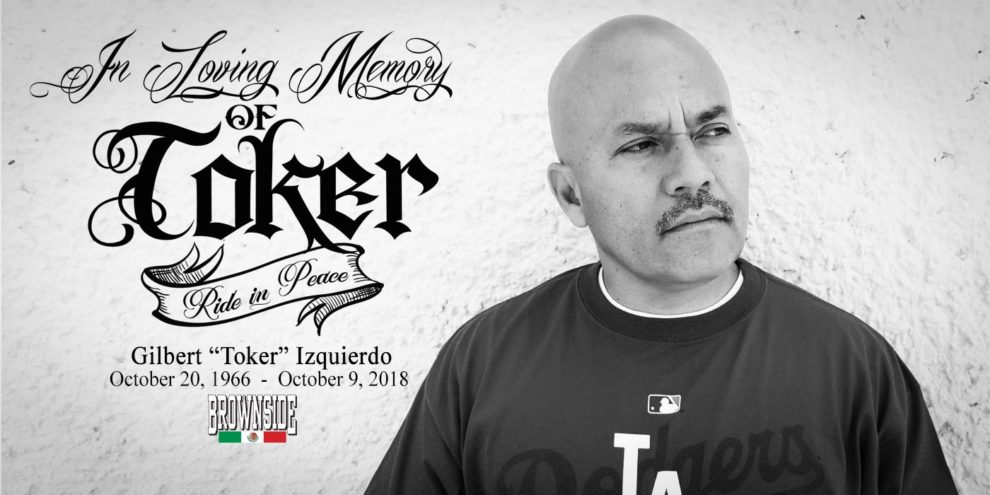 Eazy-E wanted to help form a Latino version of N.W.A.

It was one year ago this week that Gilbert Izquierdo—the legendary frontman known as “Toker” of the Chicano rap group Brownside—unexpectedly passed away.

The news sent shockwaves across the Chicano rap community, in which Izquierdo was a long-time fixture. But despite releasing a new rap album as recently as last year, it was his close relationship with the late Eazy-E, and contribution to the rise of Chicano rap in the 1990s, that he will perhaps be remembered for most.

Eazy-E first reached out to Izquierdo, a high school classmate, in 1994. According to legend, Eazy-E wanted to help form a Latino version of N.W.A, a supergroup that could depict the harsh realities of the barrio and give voice to the Mexican American experience in Los Angeles.

The group, which would go on to become Brownside, gained instant success. By the late-1990s, Brownside had not only solidified themselves as one of the most popular Chicano rap groups across Los Angeles, but the release of their 1997 album, Eastside Drama, is widely considered a blueprint for all things modern Chicano rap—gritty, raw, unapologetic.

Before Brownside, several artists already dominated the Chicano rap scene, including Frost, Proper Dos, and Psycho Realm. But it was Brownside’s close relationship with Eazy-E—largely considered the godfather of gangster rap—that made them unique. Eazy-E not only signed Brownside to Ruthless Records, but encouraged them to re-make N.W.A’s famous “Boyz-n-the-Hood” into “Vatos in the Varrio.”

Unlike N.W.A, however, Chicano rap had traditionally struggled to transcend the rigid barriers of popular acceptance outside of the west—a phenomenon that hasn’t been lost on newer Chicano rap artists. In fact, in 2011, Los Angeles-based rapper King Lil G even released a track entitled “Letter to Dr. Dre,” criticizing the mainstream rap industry for its lack of bona fide Mexican rappers and calling for a return to the days of, none other than N.W.A.

But Chicano rap’s quest for acceptance has also unearthed a greater truth. While Compton was once predominantly black, it is now predominantly Latino. And while a young black male with a microphone might have been America’s worst nightmare two decades ago, America’s worst nightmare today is a young Mexican American male with a shaved head and a microphone. Izquierdo knew this but made no apologies for his gangster persona—often to the ire of other Chicano rappers.

The national debate over immigration reform has further complicated things. With negative images of Mexican Americans plastered across television screens, it’s easy to see how a West Coast Chicano rapper like King Lil G, Conejo or Toker might scare the Midwest and East in a way not seen since, well, N.W.A.

This is perhaps why Eazy-E was so eager to lend a helping hand to Izquierdo. As a young African American male, Eazy-E knew firsthand what it felt like not to have his voice heard. As a shrewd businessman, however, he also understood the commercial potential a Mexican American rap group like Brownside might one day have. Latinos, after all, remain the nation’s fastest growing demographic. And Americans of Mexican descent make up the vast majority of Latinos.

Today Chicano rap continues to thrive. Each year, hundreds of new artists emerge and Chicano rap can be downloaded or bought on store shelves across the west. However, the role Izquierdo and Eazy-E played in what has now become a multi-million-dollar industry can’t be understated.

Izquierdo, like Eazy-E before him, continues to be missed. He leaves behind a wife and son.

Brandon Loran Maxwell is a writer, speaker, and prize winning essayist. His writings and commentary have appeared at The Hill, Salon, Townhall, The Washington Examiner, The Oregonian, FEE, and Latino Rebels Radio, among others. He regularly speaks on a variety of social topics, and has been cited at outlets such as Vox and The Washington Post. His personal essay "Notes From An American Prisoner" was awarded a Writer's Digest prize in 2014, and his one-act play "Petal By Petal" about drug and alcohol addiction was performed at The Little Theater in 2009. In addition, Brandon has fronted various punk rock and hip hop groups. He holds a B.S. in political science, and often writes about prison reform, immigration reform, pop culture, music, and Chicano culture.

Frost: The Rise Of A Chicano Rap Legend
Zach De La Rocha Is The Greatest Latino MC Of All Time And It’s Not Even Close