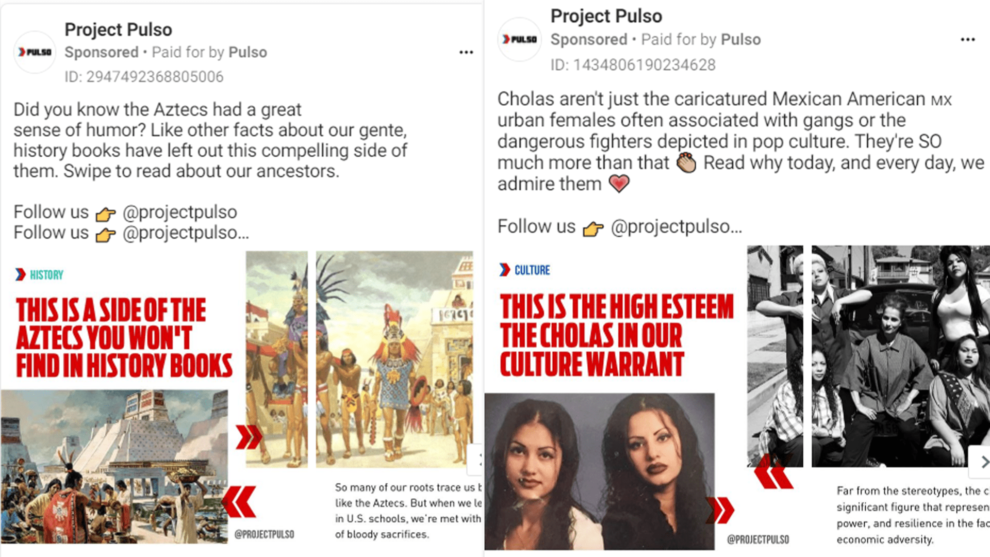 A new Florida-based non-profit describing itself as a “Latinx news organization” is actively running Chicano and Aztec-themed ads to influence Mexican Americans in California and Texas.

The question is why?

The organization, which calls itself Project Pulso, has accumulated 147,000 followers on Instagram alone since embarking on the ad blitz, despite only being founded 3 years ago.

The Daily Chela recently reviewed Project Pulso’s Facebook ad spending and found it has spent almost $1 million on political advertising in California and Texas, many ads relying heavily on cholo and Aztec-themed imagery.

The organization has significant financial backing. According to records obtained by The Daily Chela, Project Pulso is funded by a Boston-based political advocacy group called Accelerate Change, an organization that is funded by another East Coast organization called the Center For Public Interest Research.

The end purpose behind Project Pulso’s heavy spending on West Coast Mexican Americans remains unclear. But in one recent video, Project Pulso spreads misinformation about the origin of “raza,” a term that loosely translates to “the race” or “the people.”

The term, which has come under scrutiny in the past from critics, is used by Chicanos to reference unity among the broader Mexican American community.

In the video, which is entitled “Let’s Talk About Viva La Raza,” Project Pulso criticizes the term, pointing to a 1925 essay entitled “La raza cósmica” by Mexican politician José Vasconcelos. But as The Daily Chela points out, the phrase “raza” was in use as far back as 1858 in the California publication El Clamor Publico in response to the aftermath of the Mexican-America War.

While the term has been used in various ways by different people, it became a staple of the Chicano Civil Rights Movement during the 1960s, and was again popularized by Chicano hip hop artist Kid Frost during the 1990s, both which used it as a rallying cry and expression of pride.

Project Pulso’s use of Mexican and Chicano imagery seems harmless on the surface. However, the organization echoes much of the same anti-Chicano sentiment of far-right wing organizations and former President Donald Trump who attacked U.S. District Judge Gonzalo Curiel in 2016 for being a member of La Raza Lawyers of San Diego.

Such misinformation, taking into account the size of the organization’s social media following, has the potential to fan additional anti-Chicano sentiment. On its website, the organization boasts a “growing subscriber base of more than 2 million…Latinx people.”

In a now deleted Tweet, one West Coast journalist who Project Pulso attempted to recruit from California, described the organization as “fishy.”

Project Pulso’s advertising campaign spotlights the pitfalls of powerful, well-funded organizations attempting to leverage certain cultures for political gain, despite no authentic connection and regardless of intentions.

It also fuels the continued imbalance of well-funded East Coast Latino media outlets pushing narratives onto West Coast and Southwestern communities, a source of contention for many Mexican Americans and the reason publications like The Daily Chela were founded.

According to Pew Research Center, Mexicans and Chicanos make up 61.5% of all Latinos in the United States, but remain disproportionately underrepresented in media and entertainment.

In recent years, the Chicano identity has also weathered attacks from both left and right political factions who view it either as anti-American or politically incorrect.

Please Subscribe To The Daily Chela To Show Your Support

The Daily Chela is a Chicano/Mexican/Latino digital news organization. Since launching in 2020 with only $70, it has been cited by NBC News, Yahoo News, Vox, The Washington Post, Fox Sports, former presidential candidate Julián Castro, and the National Association Of Hispanic Journalists. Please consider subscribing and showing your support.