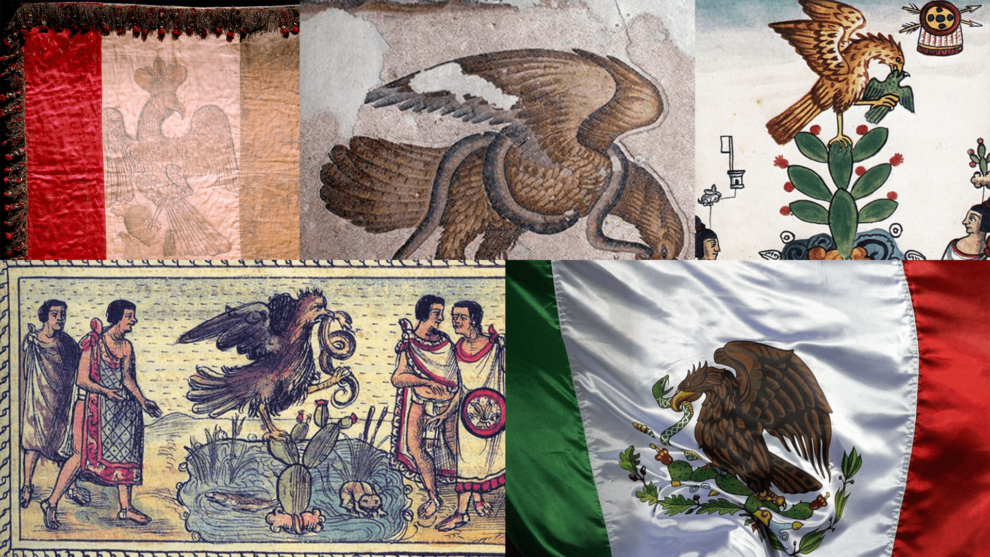 Gustavo Vazquez-Lozano
The Mexican flag has undergone numerous changes over the years.

It would be easy to spot Mexico from space. It has a very recognizable shape. In the old times, children at schools were taught that Mexico was “the Horn of Plenty” (more on the Mexican Flag below).

Mexico shares the honor of having an unmistakable silhouette with only a few nations. Italy is one of them. With its Yucatan peninsula projected northwards (one of the few cases in the world) and the Baja California peninsula projected southwards at the other side, Mexico presents an image of balance and equity, at least geographically speaking.

Mexican Flag: A Flag With A Story

Another of the most conspicuous things about Mexico is its flag, although when it is seen from a distance it does not have much in particular compared to others, especially (again) that of Italy. Both share the same colors: green, white and red.

However, the coat of arms of Mexico, full of animals, plants and water, depicts a whole narrative based on Aztec mythology. That narrative in action is what makes the flag of Mexico so special.

Most of the flags of the world have a star or celestial objects in them. The United States has fifty stars, Japan and Argentina have the sun, Algeria the moon, and Brazil constellations. There are also many flags with animals, especially birds.

The most common are the lion, a symbol of power and authority, and eagles, a symbol of freedom and high aspirations, although each country gives them its own meaning. Animals are there to communicate positive traits like strength, leadership, intelligence, and majesty.

Only the flag of Mexico has a snake on its flag, which may seem counterintuitive. The serpent is, since ancient times, an earth symbol which conveys evil and curse, cunning, treachery and bungling. Also unique in the world, Mexico’s coat of arms tells a story, an ongoing mythological battle.

To the right, next to the serpent, a golden eagle is in mortal fight against the reptile. The bird, depicted slightly higher than the serpent, appears to have superiority over its enemy, but of course the battle is in progress and far from decided. The snake is not dead. Actually, it is about to take a fierce bite. Will it be successful?

This scene —the mightiest of reptiles versus the mightiest of birds— is the only ongoing battle in a flag of the world, with the possible exception of Malta which has a miniature of St. George and the dragon.

The coat of arms represents Mexico’s tragic history faithfully, full of revolutions and violence, with few periods of peace: first it was the Republicans against the Centralists, then Liberals against Conservatives, and currently it´s the organized crime, a serious threat, perhaps the greatest ever which, like the serpent, is already entwined in national life.

Beyond factions, the battle on the flag represents a more vital fight: that of Mexico’s fidelity to its identity and history, and against the internal and violent forces that threaten to destroy the nation. Every Mexican can reflect on it every time they look at their flag.

The most attentive will find, in this exercise, that the flag has an entire ecosystem: apart from an air animal and a earth animal, opposite worlds in a fight to the death, there are also the cactus and its fruits, water, snails, precious stones, a laurel branch, an oak branch and an islet.

The serpent, by the way, is in its domain; the eagle, which belongs to the skies, is the guest here.

Mexico’s flag as the world now knows it is of recent creation. Its current form dates from 1916, with a slight modification in 1968. In the 19th century, a similar flag was already in use, with the same colors, but the coat of arms was different, the eagle was in another position, and the serpent was not there.

It was at the time of Emperor Maximilian (1864-1867), obsessed with the pre-Hispanic culture, when the snake was added to the eagle’s claws, like in the Duran Codex, drawn by indigenous people after the Conquest, although some historians suspect that this symbol —an eagle fighting a serpent— is probably an import from the Old World (it appears in ancient Mediterranean cultures) and therefore a symbol migrated from Europe.

Other codices show the eagle devouring not an eagle, but a small bird, or alone with open wings. In the end, the image with the serpent was the one that prevailed and ended up becoming the national symbol.

As for the colors, green, white and red, their meaning has changed depending on the taste of the times: originally the colors meant independence, religion and union. Later they were related to natural elements —natural resources, the snow of the volcanoes and the blood of its people.

In 1968, amidst the social unrest that swept the country, it was established by presidential decree that the colors signified hope, unity and heroes’ blood. How the government of president Gustavo Díaz Ordaz determined that white represents unity is a mystery.

The flag of Mexico is universally accepted, it is not disputed. All Mexicans, those who live within the national territory and those born outside, respect and celebrate it. Especially at sporting events, the people adopted green (and the eagle’s feathers) as their national uniform.

Unlike its impressive coat of arms, when it comes to colors, Mexico’s flag is far from unique. In fact, green, white and red is one of the most popular combinations in the world: the flags of Bulgaria, Hungary, Iran, Madagascar, Tajikistan and others have that combination, but two countries are vying for supremacy: Italy and Mexico. In fact, the two flags are so similar from a distance, that in World War II Mexican ships were often in trouble because they were mistaken for Italian ships.

Who had their famous tricolor first, Italy or Mexico? The kingdom of Italy adopted its first green-white-red flag in 1861, some four decades after Mexico. But the Mediterranean tricolor had a history: the Cisalpine Republic, one of the independent states that made up Italy, had unfurled it with pride since 1797.

Nobody really cares. Except, maybe, at soccer games.